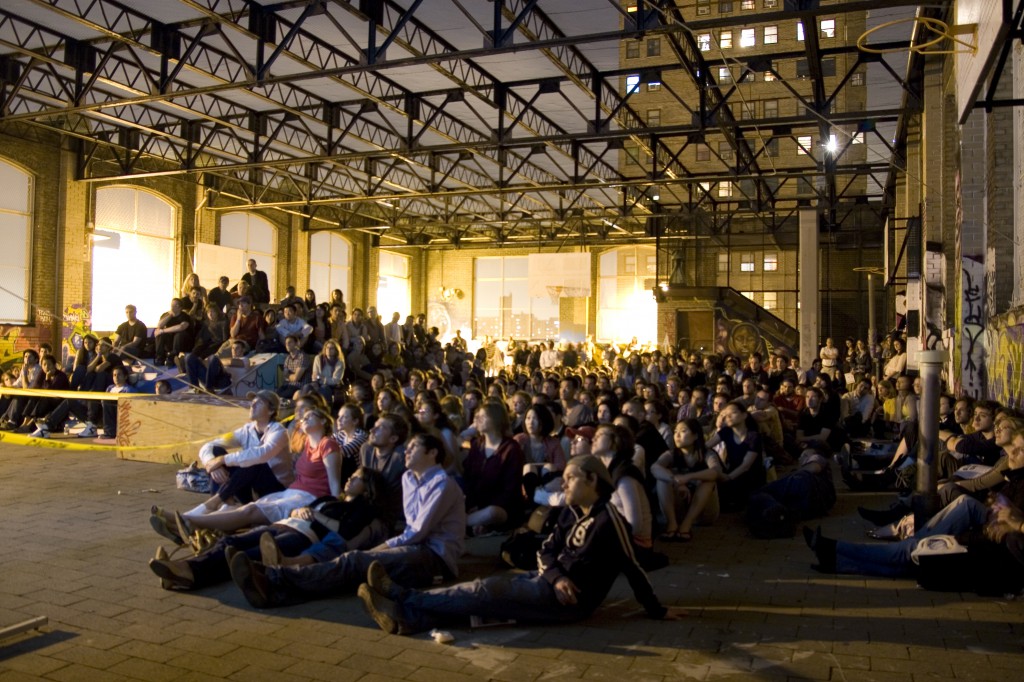 Our friends at Rooftop Films are once again offering ASIFA-East members a discount to their summer film festival!  Thank you Rooftop!  This year’s festival opens this weekend, Friday, May 10 with a selection of wonderful short films – including some amazing animated shorts – and a sneak preview of Noah Baumbach’s “Frances Ha” on Saturday. Noah Baumbach and Greta Gerwig will be in attendance for a Q&A.

Look for the discount code in our next email newsletter.  Enter the code when buying tickets.  It’s good for $3 off tickets to any show.

The Films:
Azul (Remy Busson, Francis Canitrot, Aurelien Duhayon, Sebastien Iglessias, Maxence Martin, and Paul Monge | 9 min.)
A small group of cruise-ship revelers find themselves alone on a tropic island. Forced inland, their exploration reveals the mystery that lies at its heart…
Professor Soap – Spirit, Quest, Journey (Ryan Mauskopf | 5 min.)
You can call me Professor Soap. I have my doctorate in cool and I run my own private practice.
Golg Party (Nellie Kluz | 17 min.)
Gold is a commodity that thrives in uncertain economic climates, and rising gold prices have created a boom industry around precious metal scrap. There’s a harvest every day as scrap dealers comb through excess metal from flusher times, buying up discarded gold to re-sell to refineries. Watching as these dealers buy and process gold, this documentary is a window into one small corner of a global economic market.
Slomo (Josh Izenberg | 16 min.)
A documentary about life-shifting, philosophy, and slow-motion rollerblading.
Junkyard (Hisko Hulsing | 18 min.)
A man is being robbed and stabbed by a junkie and in the last second before he dies, a youth friendship flashes before his eyes
The Captain (Nash Edgerton and Spencer Susser | 6 min.)
Nobody wakes up after a hard night and finds everything’s just worked out, do they?
Until the Quiet Comes (Khalil Joseph | 4 min.)
A short film by Kahlil Joseph featuring music from the Flying Lotus album.
Weighting (Dustin Bowser and Brie Larson | 4 min.)
She wants to go. He wants her to stay. Neither gets exactly what they want.
The Event (Julia Pott | 3 min.)
Love and a severed foot at the end of the world. Hand drawn pencil animation motion tracked to live action footage shot in Montauk

The Film:
Frances Ha (Noah Baumbach | USA | 95 min.)
Frances (Greta Gerwig) lives in New York, but she doesn’t really have an apartment. Frances is an apprentice for a dance company, but she’s not really a dancer. Frances has a best friend named Sophie, but they aren’t really speaking anymore. Frances throws herself headlong into her dreams, even as their possible reality dwindles. Frances wants so much more than she has, but lives her life with unaccountable joy and lightness. “Frances Ha” is a modern comic fable in which Noah Baumbach explores New York, friendship, class, ambition, failure, and redemption. Courtesy of IFC Films.

Rooftop Films is known internationally as one of the most dynamic film festivals in the world. In 2012, we screened more than 30 feature films, almost all of which are New York, U.S. or World Premieres. We showed over 150 short films in themed programs which have received accolades for being smart, entertaining, and filled with astonishing movies. This combination of brilliant, original programming and stunning outdoor venues makes Rooftop Films one of the best-attended film festivals in New York. We have also begun to expand to other cities. In recent years, Rooftop screened films outdoors in Los Angeles, Toronto, Philadelphia, Sweden, Texas, Pittsburgh, Camden (Maine) and others. At Rooftop Films, we bring the underground outdoors.