Posted by dayna on Jun 4, 2012 in Feature Articles | No Comments 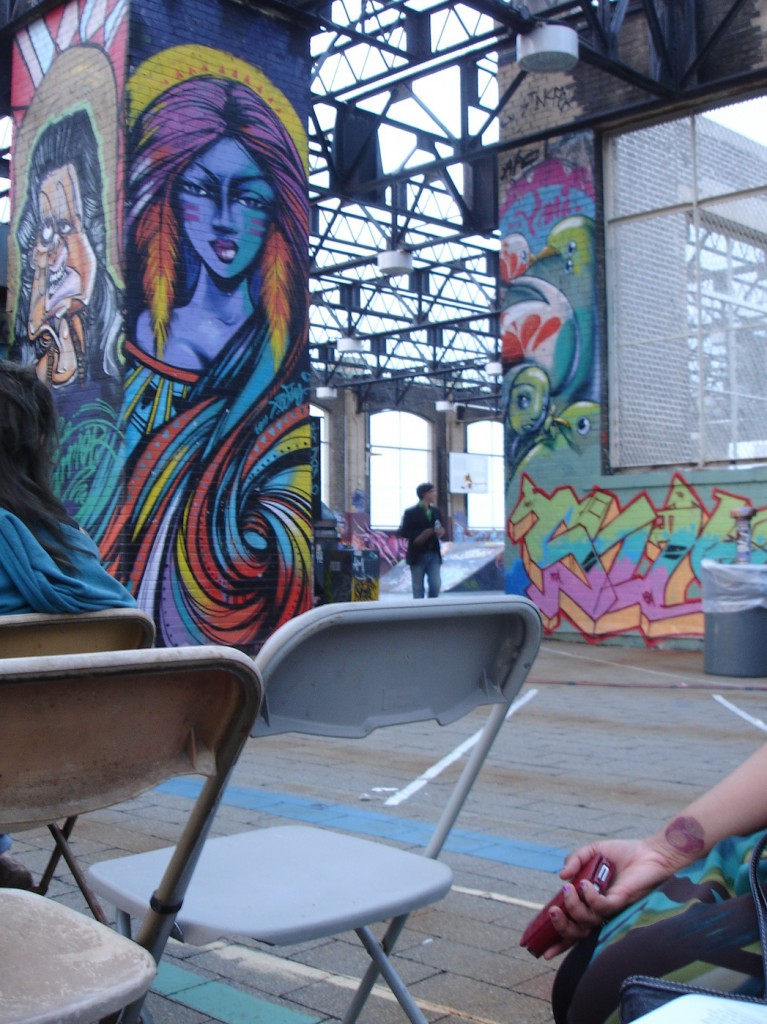 Seward Park High School is, at some level, your basic New York public school.  We had to trump up five flights of stairs to reach the said rooftop of the “Rooftop Films Dark Toons” screening, which was held in Brooklyn at the end of May.  The dull strong red of the stairway railings felt the same under my hand; even thought I was taller, I could tell these people still don’t scrape the paint off before adding a new coat.  You could pick out the tourists easily.  They were the ones who commented on the cleverness of having a double-helix of stairs separated by a wire mesh wall…  I had to get out of that stairwell.

Not allowing alcohol on the roof is a crime against humanity, or at least a sick Sesame St joke.  I suppose it is a high-school after all.  The roof is ghetto fabulous, covered in graffiti from 1980s Czech Republic, Brazil, and Japan, and complete with basketball courts and skateboard ramps.  Seward Park is actually several different high schools, and The New Design High School is responsible for the roof and recent film screenings.  It is very very large and you can wander from grated window to grated window admiring the art and the view.  A wooden bungalow stands in the corner and we suspect it has a secret stash of margaritas.

The evening started with a performance by “Soft Spot.”  Soothing music I’m sure but I couldn’t give you a better description. I liked how they performed in front of a live projected video of themselves, with a roving camera and infinity-mirror effect.  But the most interesting was how they used a spot light on half the band and how their shadows changed the composition.  I happily stared at that for a while, while munching free popcorn waiting for my friends to come back from the bathrooms two flights.  I should probably mention that when you reach the very top of the stairs you will be greeted by a cute boy and girl team congratulating you on your efforts.

These dark toons were borderline dark and mainly depressing or not very deep.  Perhaps I was expecting more dark humor, or more sadism.  Most of it was just slightly sad and slightly pathetic.  A few exceptions: “Blanche Fraise” by Frederick Tremblay [http://mediatheque.labandevideo.com/iiix/file/?id=NV1-1106] is a white on white stop-motion film about the desperate lives of a rabbit couple.  6 agonizing minutes of terrible empathy while they starve to death.  “38-39C” by Kangmin Kim [http://www.seulmin.com/kangmin_film_new.html] was a misty mixed media film about cleaning a mole on your back in a bathhouse.  And my favorite was “Belly” [http://www.juliapott.com/Belly] by Julia Pott, in which a horse and elephant find love and loss inside a whale.

After the screening the organizers sheparded us nicely into the bar a few blocks away where there was plenty of space and free pilsner for everyone.  It was a good way to digest the heaviness of Dark Toons.