Dark Toons on the Roof 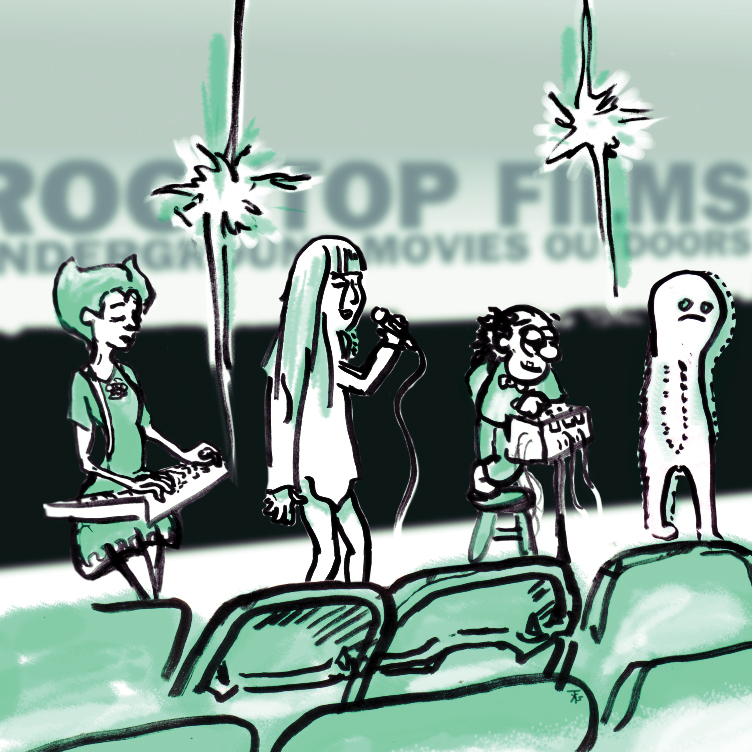 “A lot of things will go wrong,” said Michael Sauter, as he opened “Dark Toons” an evening at the Rooftop Film Festival.  One of the first things was the rainy weather, which forced the event to move to Wednesday. I didn’t think was a problem until I learned the screening was part of a Solar Powered festival.  Chew on that.  The event itself was more than anyone could ask for.  It was a balmy evening by the East river, with comfortable seating on chairs or rocks, and free beer.  Also some port-a-potties.   “Silver Swans,” an electro-pop band started off the night with some great music that rolled off the audience, past the water, and the passing street cars.  [First reader to discover the band’s comic book reference wins a prize!]  After the crowd was warmed up, we were ready for some enjoyably evil animation.

Evil is a broad concept.  The films revealed aspects of cruelty, insanity, pain, and aspects of impulsivity, abandon, and beauty.  “Sensology” (Michael Gagne) fit the bill because it had a lot of the color black in it, but beyond that it was a passionate depiction of improvised electro-jazz music.  Mr Gagne is in a place where lines and sounds are the same idea.  “The Holy Chicken of Life and Music,” (Nomint I Greece) is not particularly dark, but brilliantly 3d-animated.   Part educational film, part modernist exhibit, a single slide of the film inspired me to creativity as I waited for the films to begin.  “Moskito Bravo” (Autour de Minuit) is a cartoon bas-relief… meaning that someone took their cartoon animations and added about an inch of depth in a world a foot deep.  For those who love sci-fi I recommend “The Gloaming” (Niko Nobrain) which investigates intelligent design.  [I swear there was an alien film with cubes but it’s not showing up on the program or website…]. “The Ongoing Life of Peter Peel” (Felix Massie) was a great exercise in futility and simplicity.

A couple of familiar faces showed up as well.  “Guard Dog Global Jam” (Bill Plympton) still makes me laugh whenever I see it.  “Enrique Wrecks the World” (House of Chai) should be screened on Adult Swim.  And “Let’s Get Fucked Up And Die” (Kelsey Stark) elicited several groans and laughs from the audience.  And finally there was one other new film “Triumph of the Wild” (Martha Colburn).  This is a good stop motion film that creatively uses old cheesy puzzles to argue against human violence, but it was quite tiring with shots averaging about 2 seconds long… beautiful but a mental exercise.

“Dark Toons” is a great annual event and I suggest you look up Roof Top Films for more summer movie screenings.  After the films ended I was overwhelmed by the darkness and decided to go for that second beer.  (Bad idea).  Furthermore, I realized that many of these animations were just crafted so damn well, and they should serve as inspiration for everyone.