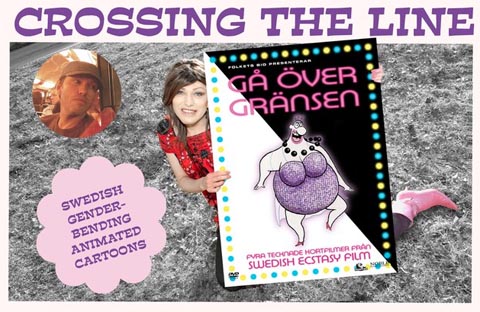 Latvian-born indie Signe Baumane has curated many animation screenings in New York, and always looks to put on not only a good show, but a very unique show. Her most recent show was certainly a unique experience, consisting of films and conversations between Signe and her ex-husband, who liked to cross-dress.

First off, the event was held at the Gershwin Hotel in Manhattan, a very abstract and bohemian looking place. Everybody gathered in this common room with multiple chairs, long cushions, a couple of beanbags, and a large white wall subbing as a movie screen. With a color scheme of red shades and white, this room looked like it could have housed Andy Warhol and his superstars.

Once we were all settled, Signe took to the stage and began discussing her belief in how a film can reveal some part of its author’s persona or psyche. Her second husband was an animator and filmmaker when they were married, and she tried to figure out something about him through his work when the marriage started to get shaky. Signe presented the film she watched over and over for answers, Honey Bunny (1992). This film is very charming, well designed, funny, and a little mysterious. Signe succeeded in making us think about trying to find some meaning in the film, and in turn the audience seemed pretty stumped. What exactly is “Honey Bunny”? It all made sense after Signe introduced us to her ex-husband, Swedish-born Lasse Persson. 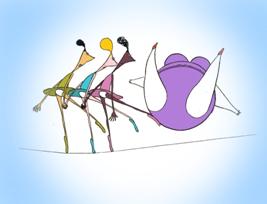 Signe called Lasse’s name a couple times but no answer. Finally, she called out for “Lisa,” and out comes Lisa, dressed very casually in women’s clothing, complete with green boots and long red-brown hair. And finally, “she” spoke in a deep swedish-accent.

And so began Signe and Lisa’s discussion of their art, their secrets from back when they were married, and their mutual understanding. Lisa also offered some anecdotes about transvestism. Apparently, Lisa had been keeping her secret for nearly her whole life, and as an artist, used her visual outlet to drop a few hints. The next film shown was the most popular, Bikini (2004). The film is a musical tale of a young man frolicking in a bikini and showing off on the beach, all set to the 1960’s tune “Itsy-Bitsy Teenie Weenie Yellow Polka Dot Bikini.” A very funny film, the animation style looks influenced by 1950’s animation, with an excellent design sense. Even more surprising was to find out afterward that this film had been featured on Fox News in America, as it was part of a school video promoting tolerance of the LGBT community. Eventually, Lisa was able to live out in the open, and doesn’t seem to harbor too many regrets (although she admits she must be careful with her kids, as they are now high-schoolers).

Signe throws in one of her own films, one made close to when she and Lisa were married, Tiny Shoes (1993). An illustrative piece, Tiny Shoes tells the tale of a young girl who finds her Prince Charming only when wearing her shoes, and through a mishap, finds herself unwillingly betrothed to a monster, all told through surrealistic imagery. After this, Signe allowed Lisa to question her on the film’s meaning and connections to Signe’s own life.

Two more films by Lisa were shown. One called The Half Kingdom (1998) seemed to share a couple traits with Signe’s Tiny Shoes, in this case with a frog regretting his behavior in ruining a beautiful princess’s garden. After seemingly making amends with the princess, she ends up eating the frog. I really liked this particular film, although the drawing style is very different from Lisa’s other films. The last film of the evening was rather controversial for some, Hand In Hand (1996), a tale of acceptance on a high wire between three snobbish and thin ballet dancers and one very large, homely dancer. Immediately, I recognized similarities between this film and Pixar’s short film For the Birds (2001). Both deal with characters on a high wire, involving small figures banded together against a larger, uglier figure. Lisa explained that people from Pixar have expressed admiration for her films, so she wasn’t surprised when one of their shorts resembled her work in some way. Despite Signe (and a few others) insisting Lisa should sue, the subject was soon dropped.

It was a very unusual evening. Lasse “Lisa” Persson’s film are very stylish and beautifully animated, and its no surprise she’s one of the top animation directors in Sweden. In terms of subject, Lisa (like her ex-wife, Signe Baumane) takes a very personal and confessional subject  and coats it with cryptic humor and surreal imagery. 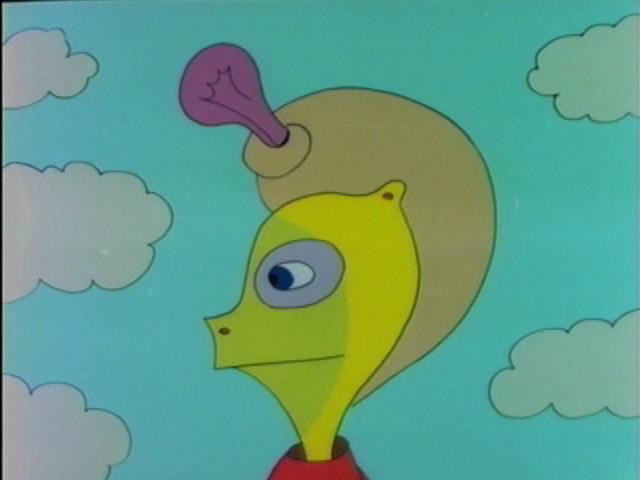