Posted by Tristian on Oct 3, 2019 in Feature Articles, Interviews, Uncategorized | No Comments

Every once in a while, two animators will form a strong connection, like two unbonded hydrogen molecules.  The story of Coaster (2019) is the story of Amos Sussigan and Dan Lund, two artists with major studio credits that formed a creative partnership.  In our first event of the year, ASIFA East had the chance to sit down with these professional animators and learn how the new film Coaster came to screen. 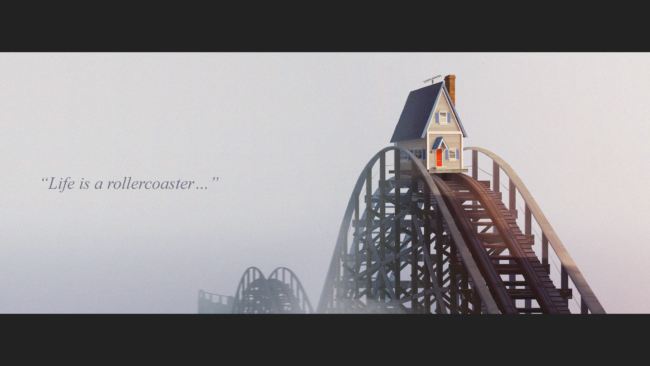 “Coaster is a coming-of-age animated short that follows a recent graduate experiencing the literal ups and downs of adulthood after moving into his first home, which happens to be built atop a roller coaster in sync with his emotions.”  In other words, Coaster is about a guy who pretty much “has his shit together,” as Amos playfully told us.  The story begins with voice-over from “Mom,” somewhere between a letter and a loving narration.  These voicemails and the occasional robotic computer are the only voices we hear, and we learn that The Guy has not only graduated, but even had some pretty girlfriends along the way.  He now faces the age-old problem of job-hunting, with a modern millennial flair.

As hopeful job applications are sent and depressing rejection emails are received, we see the house start to ascend and descend a giant roller-coaster track. Imagine a toy house, moving through a serene cloud-scape (with no sight of the ground!).  Here, the Guy’s luck and track through life are mysteriously intertwined. In a happy accident, Guy meets Girl on an internet dating website. (At this point, it’s not important how the Girl arrives, only that she does). An exciting montage of romance begins, with the two playfully being thrown together on the couch by the acceleration of the peculiar roller-coaster-house.  Suddenly they are no longer shy, and passion builds, as the house shoots up and down hills and curves, darting in and out of clouds, tossing the lovers from couch to kitchen to bedroom! 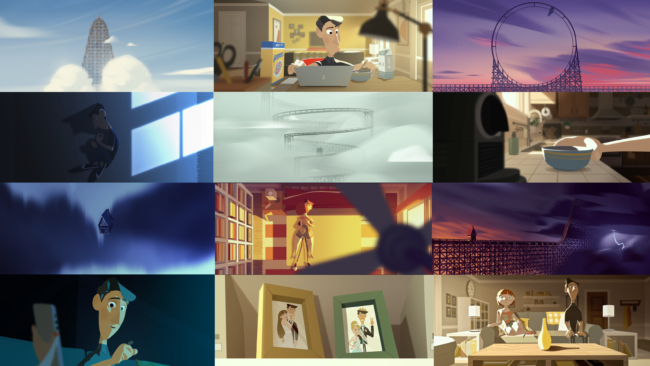 Coaster is a great example of animated story telling, illustrating something remarkable that can only be expressed in a cartoon.  But it wouldn’t exist today without a lot of lessons learned from university and the production of other short films by Amos Sussigan.

Amos Sussigan is a concept artist at Warner Brothers, working on Space Jam 2.  He is originally from Locarno, Switzerland, and studied at Woodbury University in Burbank.  Dan Lund was one of the guest speakers in Amos’ class. Dan is an effects-animator at Disney, with a specialty in presenting effects that aren’t just flashy but emotional.  He started to mentor Amos during his first student film Broken Wing (2012).  Amos went all out on his storyboards to impress visitors, and Dan found their mentorship to be both flattering and inspiring.  Broken Wing is a poignant story about two friends reuniting, and is based on a real friendship in Amos’ life, involving a rubix-cube and a tragic motorcycle accident. 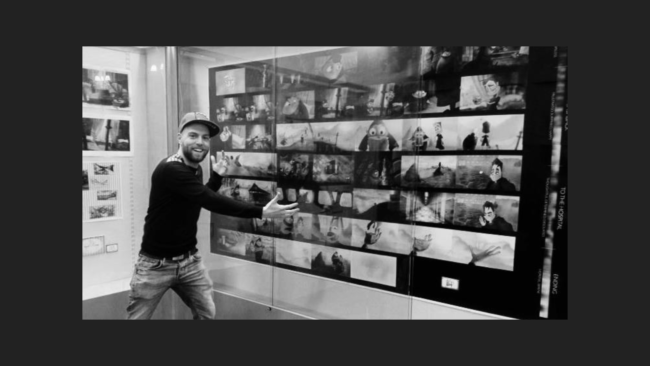 For his thesis film, Amos decided to concentrate on directing rather than animating, and had the unusual idea of outsourcing production to other artists and schools.  “There should be classes in giving notes and directing productions,” Dan thought. Swan Cake (2013) is a funny short about a little baker girl who dreams of being a ballerina, but soon rediscovers her own natural beauty and talent in the art of baking.  A precursor to Coaster’s toon-shaded style, the characters had exaggerated cute bodies and were rendered out like paint, with fuzzy edges and chiaroscuro lighting.  Amos found the production challenging, as his crew of 20 was scattered all over different time zones! There was some culture shock too. Not only did Amos have to reconcile his Swiss punctuality with California’s laid-back attitude, but he had to unite his strong female Indian producer with his slightly-chauvinist Indian animators.  Fortunately they all learned that she was delegated in charge and stopped waiting for Amos’ male voice to command. Dan Lund meanwhile, continued his mentorship with Amos, despite having a full time job working on Disney’s Frozen. 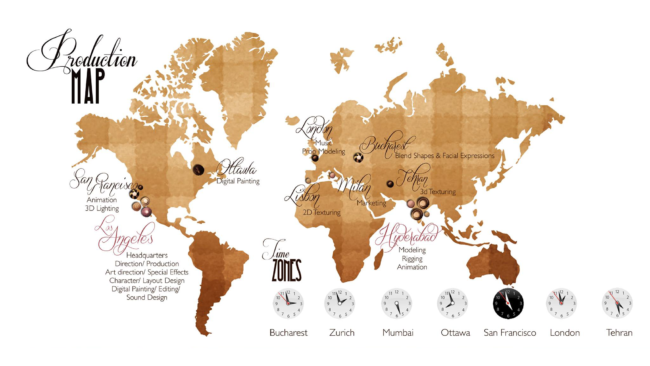 As Broken Wing and Swan Cake gathered some critical acclaim on the festival circuit, Amos and Dan decided they were ready for a more ambitious film.  Dan had access to a never heard before song by Alan Menken (of The Little Mermaid fame) and thus Aria For A Cow (2015) was born.  “What if we gave everybody a chance, whoever dreamed of making a movie…” Amos thought.  It might not be high-end but it will change lives. The two put together a team of artists, without even looking at portfolios.  Amos happened to be featured at the CTN Animation eXpo as a ‘featured new artist’ and he set up his booth to meet any and all new artists.  A challenging strategy to be sure, but it was worth it when a Midwest American housewife was moved to tears seeing her own work up on the big screen.  In Aria For A Cow, a callous farm boy impassionately milks a cow with a machine, but is interrupted by a beautiful cow who stages a dramatic Broadway number to sing and educate him on the importance of milk and how to treat farm animals.  You should say, “dear cow, I know your sensitiiiiiiive!” 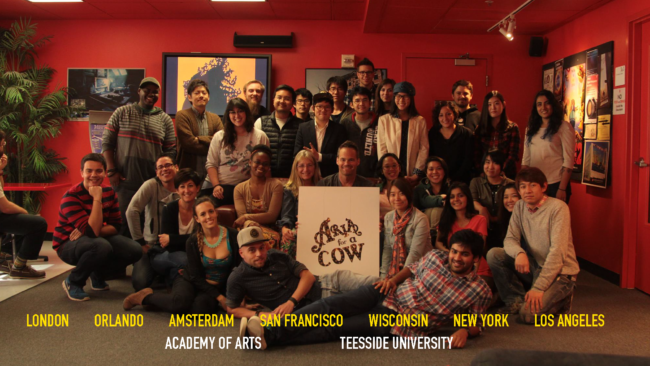 Amos experienced the ups and downs of Hollywood, as he landed his dream job at Paramount after college, and then just as quickly, lost it.  As Amos wrestled with his work-visa and unemployment, he hit upon the old adage “life is like a roller coaster.” “You don’t need permission to make a film,” Amos says.  He whipped up a poster and a logo and soon his theme was good to go, a culmination of all the previous productions, mentoring, outsourcing. “It’s rare that you get someone who would rather make a movie on a Friday night, than go to a movie on Friday night,” Dan commented. 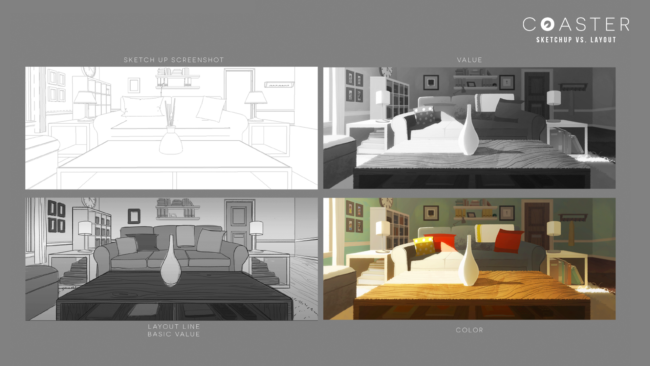 Coaster is centered around a single location, a one roomed house.  It may or may not be solely decorated by a certain Swedish company… (typical millennial men).  Amos and Dan decided to keep the designs simple and render out the models in 2-3 passes (as opposed to Aria’s 6-8 lights and textures, etc).  They had one 2012 iMac for their render farm, but almost 200 backgrounds in the film.  The cinematography of the couple’s romantic embrace, with its multiple camera angles, was the result of many recuts by Dan.  And the help of storyboards by some Pixar friends, as well as pre-viz by the animators. Dan’s belief that “1+1 must = 2” means that for every ‘cool shot with the Girl, you need a serious moment pays off in the end.’  Dan is a proponent of Bruce Blocks’ art of visual storytelling, and believes that all sound, color and props add up to the emotional arc of the story. The first shot should be the same as the last shot, but opposite somehow, which is why Coaster is bookended by scenes of eating breakfast cereal… a subtle reminder of the Mom character’s love. 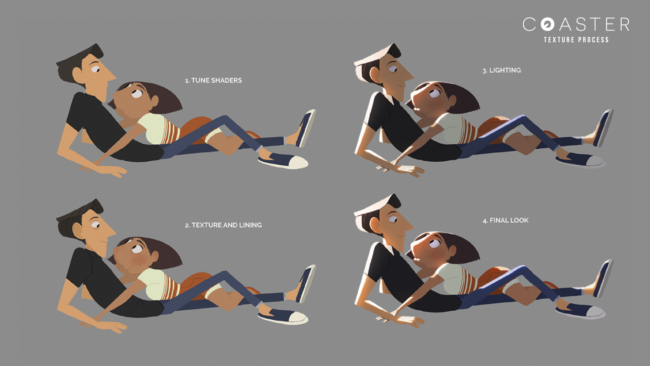 Speaking of Mom… she is the voice of the fabulous Nina West!  Andrew “Nina West” Levitt is an American drag queen actor/singer from Ohio, and won “Miss Congeniality” in season 11 of Rupaul’s Drag Race!  Amos was working at home, with television show The View as background.  Meghan McCain was doing her best hosting a Pride Month segment, and had several contestants from RuPaul’s on the show.  Nina West was on the couch looking splendid and discussed taking risks after Drag Race and her dreams of being a Disney voice actor.  Amos heard her voice and thought: “Perfect!” It was just the sound he was looking for, and he quickly texted Dan.  They had previously been pursuing some other celebrity voices, but “they just didn’t have the right texture,” Dan thought.  “The project needed a voice, and Nina needed an outlet,” Dan explained, and we heard Nina’s story in a short video about one of their promotional photo shoots. 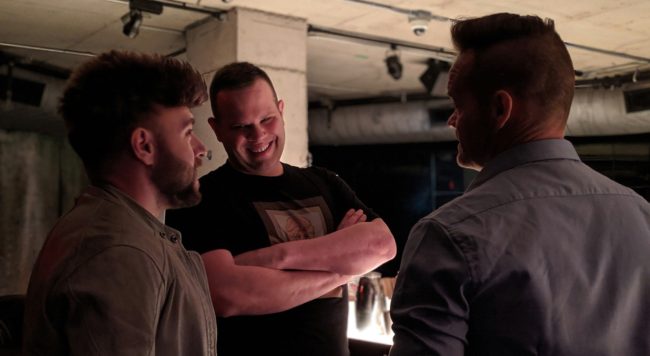 Coaster turned out to be quite “the creative ride!”  The story of Amos Sussigan and Dan Lund’s meeting and mentorship, as well as their forages into new styles of bottom-up production, should be an inspiration to new animation-graduates.  “Artists are super-insecure,” Dan noted, but “take advice seriously.”  In the end, “the only person who needs to be interested in your movie,” Amos knows, “is yourself.”

This is Tristian Goik, your new ASIFA-East President, signing off! 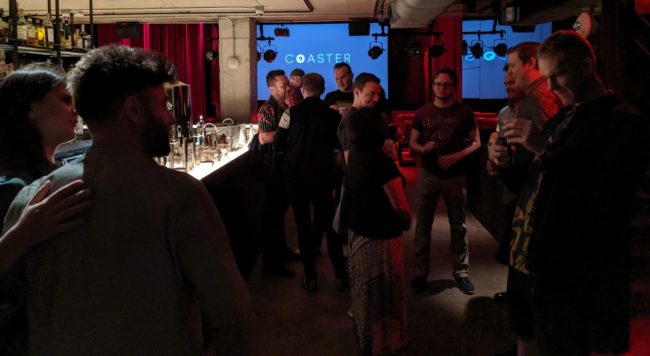 An exclusive reception for “Coaster” at Public Arts NYC!