Posted by Richard on Dec 4, 2011 in Feature Articles, Interviews | No Comments

An ASIFA Interview by Richard Gorey

This month in our continuing series of visits with New York animation professionals we’re chatting with Jane Wu, whose short film, Book Girl and Cabinet Girl, has been making an impression at festival screenings. The film is a gentle and offbeat animated parable about friendship. I asked Jane if it was a personal story.

“It is, in fact, autobiographical,” Jane says. “The idea started with a doodle of a younger version of my friend and me. In the drawing, I have a book on my head and she has a cabinet on hers. The pages from my book are flying into her cabinet. It’s actually a long running joke that I lose my memory easily and she remembers things for me.” 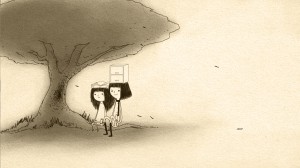 No, the title isn't merely metaphorical: there's actually a book and a cabinet.

The film’s whimsical design makes it seem playful and funny, which it is occasionally, but the subject matter is serious.  “[This friend] and I have known each other for many years and grew up together; going to the same junior high, high school and college,” Jane said. “I wanted to tell a story, dedicating it to her, and to prevailing friendships.  I’ve always enjoyed cartoons that seemed silly and cute on the surface, but had a dark theme to them. It makes it much more interesting with these contrasting elements working together.”

In Jane’s film, the two friends weather a series of life’s unexpected hurdles. At one point, Book girl meets a young man and it’s hinted he’s a bad influence. The visuals and inference are subtle, but Jane says the message is potent:

“Book girl is naive and young. She falls in love with Scissors boy, without seeing that he is dangerous for her. He isn’t abusive per se, but he does break her heart and she becomes self-destructive. The book on her head is supposed to represent her emotions and memory. Each time something occurs, it gets transcribed into the book, whether it’s to remember the event or it’s her current state of being. However, because it’s made of paper, it’s fragile and she loses her pages easily.”

The film, available to view on Vimeo, has a distinct style. The imagery is clean and clear, and the color palette is subtle. It’s not much like the boldly colorful, broadly funny films seen on Cartoon Network. Jane explains:

“Some of my biggest influences are Hayao Miyazaki, Yukito Kishiro (for Battle Angel Alita), Dino Stamatopoulos, John Kricfalusi, Matt Groening, Disney, David O’ Reilly, and Osamu Tezuka. When I started in animation, I wanted to explore a new art form and a new way to tell a story. I enjoyed my time at Pratt [where I attended school]. They did a good job preparing me for the industry, and offer a class for that specific purpose. We had homework such as preparing a demo reel, making business cards and writing a résumé. The class also brought speakers from the industry to come talk about their experiences. We went to see their studios and work environments. Most of my animation professors offered internship opportunities as well.”

That preparation helped Jane land in her current career.

“I’m currently employed full-time as an Assistant Art Director at a studio called Launch. Before that though, I freelanced– working on projects ranging from motion graphics animation to working on a PBS kid’s show. Aside from that, I’ve been working on a short film with my classmate from college, Candice Aquino, and am starting another animation project with my boyfriend, Clint Walker, who is also an animator.”

I asked Jane where the style of such films as Book girl and Cabinet girl came from.

“I am very much a visual person,” she explained, “so I almost always start with a character design of some sort. I then make a story in my head and storyboard it. I would love to make an animated series. I’m not sure about making a feature because I enjoy working with a variety of teams and learning from them. In the long term, I see myself continuing work in animation or comics.” 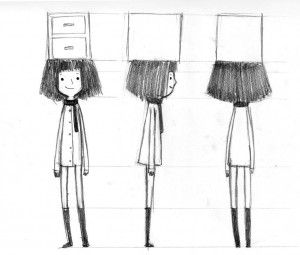 And how does a young artist go about seeking a job, or continuing to work in a chancy industry? These days, fewer people are attending festivals, and many animated films debut online. What might the value or role of these social networking sites be, for today’s animators?

“I see social networking sites as another form of advertisement, whether for an animation event/screening or to post that you’re looking for a job or are looking to hire people,” Jane said. “I’ve had friends that have posted about their unemployment and voila, someone reaches out to them with a job. I’d say people have seen my work mostly at festivals. I network both in person and online.”

What advice, if any, would Jane pass along to young people interested in a career in animation? Is it a viable career, in New York specifically?

“My advice to young people just starting their careers would be about the work they choose to show. They sometimes show more work than is necessary. Show only the types of work you want to do as a career.”

It’s good advice, just as it’s sound thinking to have something to say in animation, before trolling the local studios. Though there is a lot of independent animation done on the East coast, few people (even few animators) know about the special effects studios operating out of NY. Not every animator wants his or her own studio…though so many begin college thinking it will be their path.

“It is definitely possible to have an animation career in New York,” Jane says. “It depends on which field you’re planning to go into, though. There are more openings for certain jobs over others.”

The success of Book girl and Cabinet girl is proof that a well-made independent film can make an impression.  Jane has turned that success into a stable career in an admittedly fragile industry.

Many of the young animators I encounter are convinced the “personal” films they complete in college will be the last independent statements they make, and are frightened industry jobs are unrewarding and soul-killing. My thanks to Jane Wu for sharing her sensitive and appealing work with me, and for her insights into animation in NY as a viable, rewarding career choice.