But Disney it’s Cold Outside

On Oct.28th, ASIFA-East members had the exclusive chance to attend a Times Square screening of Frozen and a post-screening discussion with co-directors Chris Buck and Jennifer Lee, producer Peter Del Vecho and songwriters Kristen Anderson-Lopez and Robert Lopez.

{Ana and Elsa play around with new snow simulation methods.}

After a variety of teasers, deceptive trailers, and the infamous ‘Lino DiSalvo doesn’t understand women’ scandal, the story of Frozen clicked into place.  When I was young, I had “The Snow Queen & Other Tales” on tape with a picture book, so I was familiar with Hans Christian Andersen’s story of a boy corrupted and spirited away to the icy north by a fairy queen, and the sister who has to save him.  In Disney’s Frozen, our heroine Princess Ana (Kristen Bell) has to save their kingdom from her misunderstood magical sister Princess Elsa (Idina Menzel), with the help of a bumbling snowman Olaf (Josh Gad) and bumbling dude Kristoff (Jonathan Groff).  Walt Disney himself first tried to get this project off the ground in the 1940s (I have 1948 written down but the LA Times says 1943).  It took several rewrites and rehires to take it from an animated MGM title sequence to the stereoscopic 3d CGI musical it is today.

A few people have made the argument that Disney was somehow further disenfranchising women by rewriting the backstory of the Danish fairy tale’s heroine, but I see now that it’s easy to get carried away with criticisms even before seeing the entire film.  There are many ways to analyze the importance of a heroine saving her brother vs a heroine saving her sister.  Frozen‘s story and songs provide updated lessons-of-the-heart to the girls of today, girls who have actually been raised on decades of Disney’s unique princess culture.  The film is self-aware as it reverses some of these effects, and assuages with modern feminist touches, perhaps because of Disney’s first female director, Jennifer Lee.  Where princesses’ once simply married up-and-out of their troubles, (Snow White, Sleeping Beauty, Cinderella) the princesses of the last two decades have progressively become more independent and comfortable being single, (Ariel, Mulan, Tiana).  At least for a while longer before they marry, because finding true love will always be an important part of a Disney movie.  Somewhere in the last ten years Disney Princesses have picked up a stigma of being “too pink” and weak for proper role models (remember how they redesigned Merida to fit into the Princess-club), and I feel that Frozen is at least taking responsibility for the narratives it tells (and aggressively markets) to young children.

Personally, I now dismiss the controversy over Lino DiSalvo’s (the head of animation) P.R. disaster, [“Historically speaking, animating female characters are really, really difficult, because they have to go through these range of emotions, but you have to keep them pretty and they’re very sensitive to — you can get them off a model very quickly.” – DiSalvo] as something he shouldn’t have said because maybe he was too tired from working really hard on multiple Broadway-worthy duets.  Compared to other popular mainstream movies that address how teen girls should use their special powers (exempli gratia Twilight), Frozen has a different message of the feminine role in love.  Just as Emma learns in “Once Upon a Time” (in Disney’ other property on ABC) Frozen teaches us that there is more than one way to use the power of true love’s kiss.

Co-director Chris Buck told us after the screening that they ‘drew on the past and pushed the crew,’ but I was actually feeling the pull of many millennial sources.  Glee and American Idol have been setting the stage for powerful “Defying Gravity” moments for years.  And there has been enough hideously embarrassing humor generated by The Office and Tina Fey’s 30 Rock to set up Ana’s awkward introduction to the handsome Prince Hans.  In a short but sweet slapstick scene involving a horse and a perilously balanced rowboat, Ana manages to meet, greet, fall on, grope, and call-herself-out in front of a sexy man, all in the space of a few minutes.  Compare this to Princess Aurora meeting the perfect stranger in a forest 54 years ago, and it would be hard to imagine these two princesses being very close friends.  Disney has a good grasp of what young adults feel today, reaching a broad core of ironic and sentimental audiences.  <SPOILER> Although, I did find the suppression of Elsa’s magical powers by her parents to be creepy to a psychoanalytical degree, seeing such mental anguish rendered in song (“Keep it inside, repress all my feeeeeelings la la la”)  makes me wonder what problems today’s children are actually wrestling with.</SPOILER>

Musicians Kristen Anderson-Lopez and Robert Lopez described their work as a continuation of Howard Ashman’s and Alan Menkin’s songwriting traditions.  They both attended educational programs at Broadcast Music Inc, and told us about their lessons for writing classic (and Broadway) moments such as the “I Want Song” and the “double hook” technique.  Twenty-five songs were written for Frozen, which were whittled down to eight and one reprise.  The co-directors Chris Buck and Jennifer Lee held video-conferences with Kristen and Christophe as they wrote their songs.  In what must be a very cool studio in Brooklyn, the musicians worked throughout the day and had meetings and production notes every morning… “Kinda like having a job” said Christophe.  😐
Kristen passionately told us a few stories about the process.  Being a big fan of 1950’s stop motion animation and its music (like Rankin/Bass’ Rudolph) Kristen decided the only time she would use stereotypical sleigh-bells would be in a song by Olaf to set up a winter-holiday mood that takes a sharp left turn.  During the recording session of Frozen‘s opening song about ice-pickers (which is as good an opening idea as any I suppose, and slick for stereoscopic purposes, but I digress) some Julliard-trained percussionists got so excited with the material that they ran to grab ice-buckets from the Foley guys to record their own musical hacking and sawing for the song. 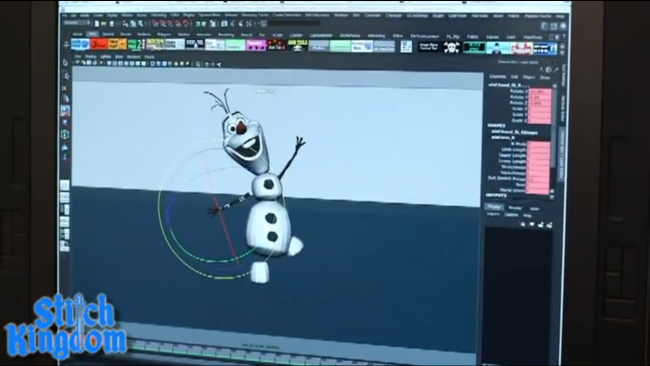 {Adding some follow-thru on Olaf’s performance.}

In her discussions of character development, Kristen also insisted that Princess Ana had to be a real girl, that ‘she’s got to be funny and she’s got to have morning breath.’  Co-Director Jennifer Lee mentioned that Olaf was a pretty annoying character until Josh Gad (from the Book of Mormon) took the role, and in production meetings Olaf was rewritten as an ‘innocent.’ And they told us that Idina Menzel identified with her character Elsa, because when she was growing up she felt guilty that her star-singing-talent took attention away from her own sister.  Frozen had a fun song by Kristoff, fleshing out his dreams and battles with athlete’s foot, but it was cut for time.  In fact, the film’s best duet “Do You Want to Build a Snowman?” was tossed in and out of the movie repeatedly, until people realized that almost everyone at Disney thought the song was special, and it was finally kept.
[youtube=https://www.youtube.com/watch?v=uLHP7KgZuoI]
My favorite song is the “Let It Go” power ballad (to one by Menzel, not the Demi Lovato pop cover).  <SPOILER>: in the movie Elsa finally frees herself from the confines of her ivory tower (her mental and physical prison), and encountering freedom for the first time, she immediately comes into her own and expresses herself beautifully with ice and song.  Blasting beautiful rosemal of snow-magic into the air on a mountain top, Elsa spins in homage to The Sound of Music.  The chorus of “Let it Go” makes up for the heavy handed lyrics of repression from earlier in the movie.  With a sexy yet powerful Broadway stomp of her foot, Elsa gives herself a makeover with magical clothes and a wonderful hair-blowout.  Her legs peek out demurely from the slit in her dress as she strides forward (pan up) singing “I’m not a perfect girl!” while being… a perfect young woman.</SPOILER>  I’m not sure exactly how to take that unintentionally ironic moment, but I will give Elsa credit for singing about fractals forming through crystallization of ice molecules in the sky.  (Hey Robin Thicke, what rhymes with fractals?)  Hopefully this will inspire young girls to Google these new words and pursue careers as scientists and mathematicians.  The song juxtaposes beautifully with the creation of her new ice palace, which rises out in four fantastic dimensions.

The directors and musicians urge you to think of snow itself as a character in the movie.  In order to capture the essence of a winter environment, Disney sent their animators to walk in snowdrifts.  Imagine men and women wandering around Wyoming, shivering in piles of snow 3 feet high…all of them wearing dresses.  A new software particle simulator called Matterhorn was created that allowed the CGI characters interact with the virtual snow in ways that were unknown, and even unavailable to Disney itself in the beginning of production.  Be sure to click the aforementioned link for SIGGRAPH’s inside look at the new “snow simulation method utilizing a user-controllable elasto-plastic constitutive model integrated with a hybrid Eulerian/Lagrangian Material Point Method.” 😀  <SPOILER> What ever they did, it works.  In one of the climatic battle scenes, Prince Hans battles a snow giant and cuts it leg off.  Hurling himself forward, Hans barely makes it onto a crystal staircase before it shatters into the abyss.  I have not experienced such a thrill in a Disney movie since Prince Phillip’s battle with the dragon in Sleeping Beauty. </SPOILER> 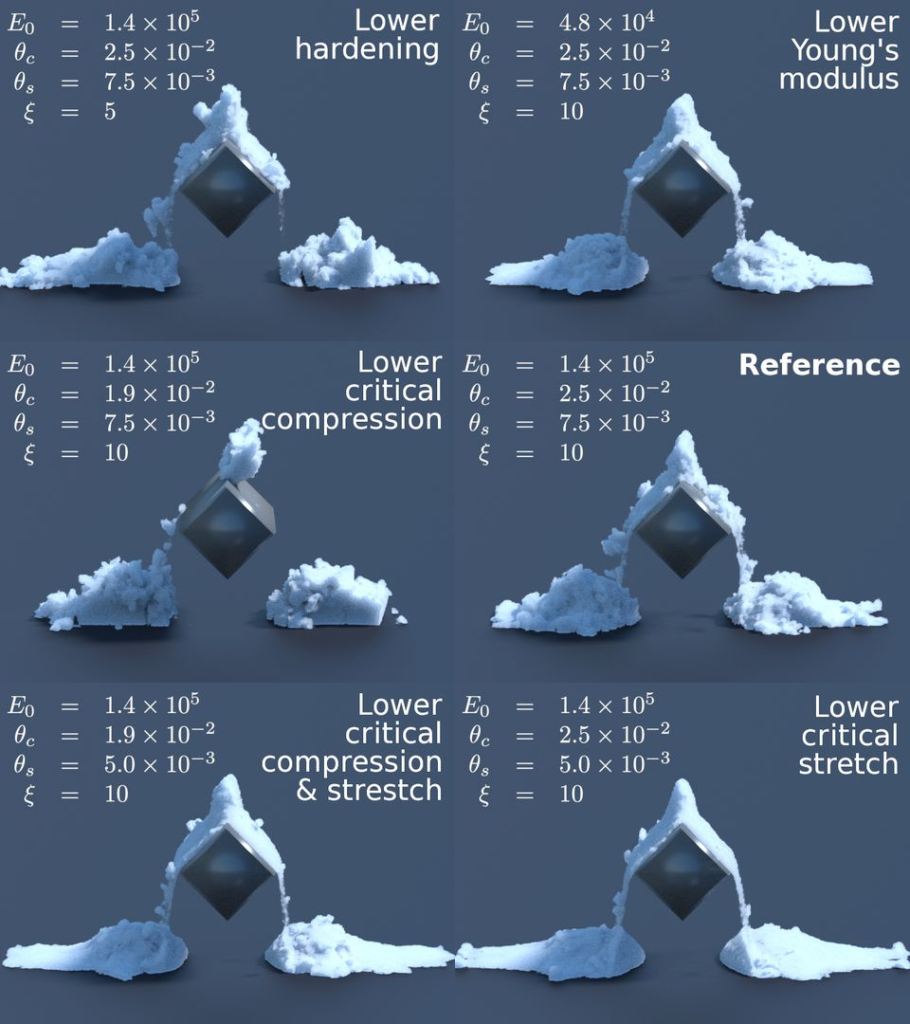 In addition to the feature Frozen, Disney also gave us a short film before hand called “Get A Horse!”  Mickey and Minnie Mouse return in a jaunty black-and-white film, animated in rubber-hose style.  A lot of the gags had emphasis on sexiness and violence, and while Tom Strathe’s Cartoon Carnival has taught me to expect such jokes in these films, we can get away with so much more 80 years after the Hayes code…  Old timey cows shake their  voluminous udders, and the bad guys who kidnap Minnie get pitchforks up the ass.  Mickey and Minnie are admirable for their undying love, but I wonder at what point are they just sadistic jerks?  At any rate (29.7 fps) there is brilliant use of the 2d screen compared to the 3d/stereoscopic CGI environment.  Gags involving flip books and film editing itself abound, and make it a lovable short for the animation industry.

It’s slightly amazing that Frozen already has a lot of information about it’s production history documented online.  The wiki is chock full of tidbits, such as Frozen‘s art director Michael Giaimo being inspired by Black Narcissus, and there are fascinating behind-the-scenes looks at animation.  Josh Gad just gave an interview to i09.  But I would suggest putting down whatever you already know about Frozen, and take your family and friends to experience it on the big screen.  Hopefully they will come out of the theater with a new appreciation for Disney princesses, and this generation of kids will gain their own moments of wonder equal to our parent’s appreciation of Cinderella’s miraculous transformation.  Happy Holidays everyone!

Frozen will be theatrically released on Nov 27th, 2013, nationwide.