Our 2011 ASIFA-East Used Animation Art (and original art) Auction is just over a month away on December 20th!

We all know about Don Duga‘s work for UPA (Mr. Magoo), Rankin/Bass (“Rudolph the Red-Nosed Reindeer,” “The Year without a Santa Claus,” “Mad Monster Party,” “The Little Drummer Boy,” and “Frosty the Snowman”).  And we’re aware of his contributions to Sesame Street, a handful of feature films, School of Visual Arts, and a million other things.

But did you know he also designed the characters of Twinkie the Kid, King Ding Dong, Captain Cupcake, and Fruit Pie the Magician for Hostess?

Our first Auction Item is an original piece, painted and signed by Mr. Duga himself! 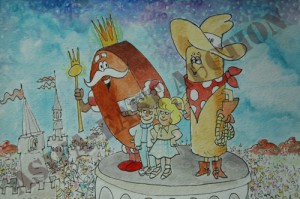 Click here to watch one of the original Twinkie the Kid commercials from the 1970’s!