Jake Armstrong grew up in Norman, Oklahoma and moved to NY to study animation.  He’s currently a freelance artist living in Brooklyn doing anything from animation to storyboarding to illustration and makes a bunch of things on the side. 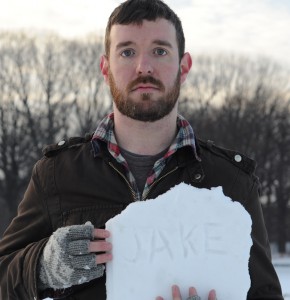 Interview by David B. Levy

1-Your SVA Thesis short “The Terrible Thing of Alpha-9!” had nothing “student” about it, introducing you as a major new talent in the animation world. Every detail about the film including writing, design, color, and animation felt very thought out and complete. How did you achieve that when many thesis students struggle to turn in a half-complete film? (Note, your answer doubles at advice to current and future thesis students):

Thanks, David! In the first few years of college I was a total slacker, not really caring and scraping by with a D in every class.  When I was a scenic design major, I had a sewing class with a mean little woman teaching it, and one time when I was asking for help on the assignment, she asked me, “If you’re not going to care about this class, why are you even $&%*ing here?” I immediately dropped my major and moved on to the next thing. When I finally got into an animation school (after getting rejected the first time), I realized that nothing is worth doing if you don’t love it.

When making my film, I wanted to showcase this idea as much as I could, making it a point to be excited about every step of the process.  If you are an awesome draftsman but hate story and ignore it, it will show, the film will suffer, and the audience will suffer, and nobody will notice those cool drawings.  If you don’t want to make the sound or write it, you can adapt from many sources or pay small fees to have someone do that part for you.  There are ways to bypass those things.  Not having extra money for those production costs, I worked very hard at making a story and idea that I’d love, and I planned my production so I was throwing sounds into the film six months before it was due.

I think the planning and care that Don Poynter (my advisor) and I pumped into it made the film work as well as it could.  But how do you make a successful film?  I honestly have no idea.  I think I got lucky with this one, but I believe a good production schedule and a lot of effort can at least make something as good as it can be. 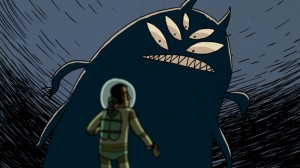 2-One of the joys of your film is that the storytelling unfolds strictly through pantomime. Was this always your intention? And, how did the choice of no dialogue help shape your animation?

I was kind-of always my intention, I guess.  I wanted dialogue, I feel like it lends immensely to characterization to hear an actual voice.  Unfortunately the story is set with a man and a giant dog, and it honestly made no sense to have them talking to each other (plus that would probably negate the whole conflict).  I thought about adding a third character talking to the spaceman on a telecommunicator, giving him the assignment to kill the beast, but that was just too much exposition and the side character made the story feel convoluted.  So I worked in grunts, screams, and sobs wherever I could to help give more of a dimension to the characters.  Also I kind of cheated by putting the exposition in the title credits, just like expository dialogue would do.  Pantomime for me is pretty fun to do, so, honestly, I think that came naturally.  But for my next film, I really want to add the dimension of voices.  It just adds so much to the experience.

3-When you finished the film how was it received at festivals around the world? And, did the exposure open up any opportunities for you? Did your three gigs directing spots for the preschool series Yo Gabba Gabba come out of this?

The film was luckily very well received worldwide, playing at a ton of cool venues all over the place. Still, it’s probably got a larger spread of views through being on Cartoon Brew.  Being on the Internet has more or less led to a huge amount of the projects I’ve done since graduating, and has led to people in many studios around the world checking it out.  I got to do the one spot on Yo Gabba Gabba, advertising at SXSW, and tons of cool storyboarding gigs for Cartoon Network shows, all of them hooked up via e-mail through the film’s internet views.

But I do want to point out that there are a ton of ways to get jobs, and I think my internship at Augenblick actually led to a lot of work as well.  My other main source of jobs is mostly my friends who help me out and recommend me when I need to pay rent.  In my opinion, you can never work too hard at looking for work when you’re a freelancer.

4-Some other talented folks in your SVA peer group (including Kat Morris, Rebecca Sugar, and Ian Jones-Quartey) moved to L.A. and found employment in Hollywood animation factories such as Cartoon Network. Although you also moved out their briefly, what brought you back to NYC?

Well I actually went out at the same time as Kat and Rebecca, working on the same shows at Cartoon Network.  Kat went out before me, then Rebecca and Ian the following month.  It’s kind of nebulous as to why I came back, I think it’s just that I didn’t feel like I was ready to leave the city yet, and that LA wasn’t quite feeling like home.  I’d hate to say that Cartoon Network is a factory though, it was one of the most immensely creative and fun jobs I’ve had since graduating; and if it were in NY, I’d be knocking down their door for employment.  Freelance is hard and NY, by definition, is a struggle.  I probably don’t see myself staying here or in this employ forever, but for now it works and is really fun.  I’d honestly love to have a cushy studio job so I could do that and work on my stuff at night.

5-This past summer you told me about another short you were animating, a more abstract non-narrative piece. How is it coming along, and why did you decide to follow up your successful “Alpha 9” narrative film with a more experimental one?

Actually I kind of lost steam on that project unfortunately.  It was going to be a kind of epileptic seizure of a film, but such an experimental short is very difficult for me to put together.  Hopefully I’ll continue on it in the future, but in the last year I’ve been keeping myself busy with a lot of new projects.  I’m writing a couple shorts right now, and have been screenprinting (a printing technique that uses a woven mesh to support an ink-blocking stencil) a ton.  I also have a short comic I’ve started; the first section of it is going to be in the second “Fakeheads” anthology, and will be sold at MoCCa along with other recent artwork.  It’s so hard to get a lot of work done when you’re working a lot, but I’ve been keeping myself really busy.

And to answer why I’m moving in this general direction, it’s because I really want to keep myself varied.  When I made Alpha-9, a lot of people asked me to pitch that as a TV show, or come up with other space-related comedies.  I don’t want to get myself stuck doing only narrative films, or space films, or even just shorts.  I think that I still have time to try out all the different types of filmmaking, drawing, and art that I’ve (for the most part) ignored all my life, and I’m having a great time exploring all these different possibilities.

6-If we resumed this interview ten years from now, in what would be roughly be the 12th year of your career, what would you hope to be doing or have achieved?

Oh man, that’s a golden question.  First, I’d hope to have loans paid off.  Then I’d probably want to have moved into being a director and have worked on a feature, hopefully one in the same.   I have too little focused ambition and too much varied ambition to ever really know what I want or to find a real direction.  I’m crazy about films, art, cartoons, and music, and want to continue with those for the rest of my life.  I hope to have made something really cool with all of them in 10 years time.  That’s maybe a little ambitious, but I think that’s a good goal to have.