Diane Kredensor’s formative years were spent making children’s books out of construction paper and way too much Elmer’s glue, and her grown-up years have been spent pursuing a successful career in children’s animation in Los Angeles and New York. She still hasn’t grown up all the way, something of which she’s proud. Diane is an Emmy Award-winning artist who has worked on such hit shows as Pinky and the Brain, Oswald, and WordWorld, to name a few. Her first children’s book, Ollie & Moon,  that she wrote and illustrated—published by Random House— will be released April 26, 2011. Her second book in the series hits bookstores Summer 2012! Diane happily makes her home in Brooklyn, NY, with her three loves—two of whom bear a passing resemblance to Ollie and Moon. 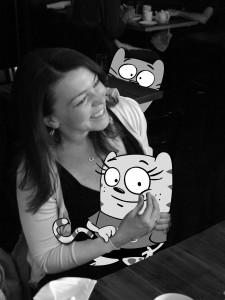 Interview by David B. Levy

1-You had the experience of supervising Storyboards on the aborted production produced “Nate the Great,” at the short-lived NY Studio Animagic. Since that company closed you started your own animation company, Tricycle Films, and have had success in development at PBS Kids as well as your own children’s book published at Random House. How much did your burst of creativity and entrepreneurship have to do with reacting to what happened at Animagic?

Good question! I guess ever since I can remember I’ve been a mix of creativity and entrepreneurship. As a kid, I’d set up my homemade lemonade stand by the side of the road and if you bought a cup of lemonade it would be accompanied by a silly cartoon written and drawn by yours truly. I was a big fan of puns, so a typical cartoon would say something like, “Look out, Bob’s on a roll!” written under a crude drawing of a guy running atop an actual dinner roll.  I called my stand “The Cool Off and Laugh Spot”. I’m truly surprised it never took off and became a successful chain.

As a grown up, I’ve been a part of some really solid animation productions and I’ve also been a part of some real clunkers. The experience at Animagic was incredibly disappointing. There was a lot of talent, but we couldn’t do what needed to be done to make the great show we knew was possible. And that was because we weren’t in the position to make those decisions. So even though I’ve always had the entrepreneur spirit, the experience with Animagic definitely fueled the fire to develop and sell my own ideas. And more importantly, to be a part of creating teams that are collaborative, creative, and experienced to produce a successful show.

2-What are your goals for Tricycle Films along with partners Jack Spillum and Jeff Buckland?

Starting and maintaining a business is hard work.  Our love is animation and our goal is to create, develop, and make it any way we can.  Developing ideas is a constant and often challenging  process. Selling and producing those ideas is yet another challenge. But we’re on the court instead of sitting in the stands and that’s pretty darn exciting. Besides developing original properties, we’re also open to what comes our way as long as it includes creativity and we have fun doing it (oh, and we have to get paid!). So we’ve done a ton of writing, designing, storyboarding, directing and producing for clients like Sesame Workshop, Disney, Scholastic, and others.  You can’t anticipate everything you’ll encounter so it’s good to be flexible and open to explore opportunities in every conversation. When we heard that publishers were making video book trailers to promote their books, we dipped our toes in and today we’ve produced many book trailers for Scholastic and Scholastic Book Fairs.  And we love making them. We’ve also recently expanded to shooting and producing live-action trailers. So anything is possible for the future. You can check us out at www.tricyclefilms.biz

3- How did you begin your career as a storyboard artist and would you recommend the same path to someone starting out today?

I think everyone has to find their own way and do what works for them. My path is only one way. After working in advertising for a few years out of college, I knew I wanted something else for my career. Something that involved storytelling and definitely more drawing! Animation seemed like a perfect fit. So I packed up my little Honda Civic hatchback, with whatever belongings I could fit inside it, and I drove from Baltimore to Los Angeles. I tried many different roles in the animation —I was an inbetweener so I learned how to animate, I was a prop designer, a character designer, and then eventually a storyboard artist. I’ve also written, directed and more recently I am producing.

Working in all of these various roles has helped me understand the whole animation production process, not just one piece of it. I get how every piece works together, and not only does that give me an appreciation for each part, but I think that makes me a better storyteller because I’m not just focusing on one aspect of the story, but all of the parts that make it come to life.

4- Storyboarding for TV has really changed since you storyboarded on such projects as Freakazoid, in that much of the storyboard work today is drawn directly into flash or Toon Boom with the board artist directly interfacing with the audio track and building a sort of storyboard/animatic hybrid. What do you think has been gained or lost by this method?

Wow, I feel old. Yeah, I guess you’re right, some major changes have happened technology-wise since I first started boarding. When I was at Warner Bros., the layouts were still done in-house. So we could board pretty loose. The goal was to get a strong gesture and angle down, but not overwork the drawings. I was encouraged by one of my directors at the time to board with a Sharpie so I didn’t get too precious with my sketches. Once I got over the shock of tossing out my non-photo blue pencil and drawing with a black marker, I learned to love it. I felt like I became a better artist because I wasn’t trying so hard to get a perfect little drawing. I was focusing more on the feeling that I was trying to get across and less about making it pretty.

I guess the next transition was when I had to let go of the Sharpie and get used to the Cintique and  pen tool. Technology confounds me—I have a love-hate relationship with it. But I’ve learned to love boarding in Flash.  Being able to work with the track or music and build the animatic while I board gives me a greater understanding of the big picture and I feel like I have a lot more control. Plus, it’s a huge time saver. And a space saver too! I still have boxes and boxes of paper storyboards that are taking up way too much space in my Brooklyn apartment.

But as far as gained or lost, I don’t really think anything has been lost in the process of moving from storyboarding on paper to storyboarding in Flash or Toon Boom other than that wonderful feel of a pencil on paper. I find working with technology and not fighting it makes me a much more efficient artist and producer and then leaves me with more time to come up with silly ideas. I can still create something with that same look and feel that I got with my Sharpie, but now I’m able to copy it, change it’s size, animate it, color it, and send it off to a client a lot faster than I could before I got my Mac! 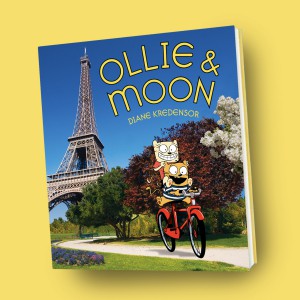 5-You’ve had some success in development from your original pilot (co-created with Dana Galin) for Frederator (Call Me Bessie) to making to the semi finals of a development initiative with a preschool math series for PBSKids, to your current development deal to turn your Random House book, Ollie & Moon, into an animated TV series. Do you see a time when you’d give up this dream or have you been encouraged enough to keep going?

And, what about this dream has carried you this far?Oh, hecks yeah I’ve threatened to quit many times. But I never mean it. It’s just usually a reaction to disappointment. It’s hard to put yourself out there over and over again and get rejections and not take it personally. But the truth is, it’s not personal. We just create stuff, people see it and they have a reaction. They like it or they don’t.  I think I’m always going to want to be involved in some sort of creative venture—because being creative is fun.  And I’ll always want to continue to challenge myself, or else life gets boring.  So I don’t really have a choice but to keep going.

If I had any advice to give to anyone who’s asking or listening, I’d tell them to write as much as possible. Don’t edit yourself. Just get it out, let it flow. I always have to remind myself that writing and creating is not about the end result, it’s the journey. That reminder helps me from trying to write a “perfect” story right out of the gate. There’s always time to go back and edit later.

Also, embrace failure. That’s probably one of the most important lessons I’ve learned in life. It’s okay to put something out there and have agents, publishers, or whoever, turn you down. Look at the feedback they give you and see if there’s anything useful to apply to your next idea. But don’t make it mean you shouldn’t be writing!

Here’s one of my favorite quotes about failure that I agree with 100%, and I remind myself of often:

It is impossible to live without failing at something, unless you live so cautiously that you might as well not lived at all. In which case, you fail by default.—JK Rowling

And finally, have fun. If you’re not having fun, what’s the point?

6-How does illustrating a book differ from drawing a storyboard in terms of your mindset as you work, or how you try to communicate to your audience?

I’m used to drawing many poses to express an idea in animation, but in a picture book, I had to learn how to capture an idea in just one pose. It’s not as easy as some artists make it look. I’ve always loved picture books, but now I have such a greater appreciation for them.

The challenge of expressing one moment or story in just 32 pages, was a great one. But I loved the opportunity! I used to write and illustrate my own books as a kid, and I don’t think that passion for creating characters and stories has ever left me.

So, I hope you enjoy Ollie & Moon!  And when you do—because I know you will—please recommend it to all your friends! You can check it out here: www.ollieandmoon.com