“Around The World (And Back)” by Bryan Brinkman

Music videos still haven’t gone out of fashion yet. The possibilities of combining of music and art are still endless. That said, here is Bryan Brinkman’s animated music video for Dot Dot Dot’s “Around The World (And Back).”

The animation style of the video doesn’t have a label yet, although we’re sure Bryan might have one. The style involves turning our index fingers into characters, and placing them in various locations. The video follows a good-natured finger as he travels throughout New York City to meet his loved one. Interspersed are “finger” renderings of the Dot Dot Dot band members.

The video is quirky yet joyous. Bryan succeeds in visualizing something that is both offbeat and good-natured, leaving the viewer with a happy feeling. The visuals really do match the song nicely, which itself is a simple yet uptempo love song. And love appears to be the answer after all. 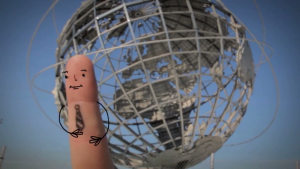 The video is a mixed media that features animation overlaid on live action shots of several key locations around New York. Among these locations are Flushing Meadows, Radio City Music Hall (right near the home of the Jimmy Fallon Show, we might add), and Central Park. Along with the fingers, we are also treated to some of Bryan’s wonderfully offbeat characters, such as the giant robot drumming through the New York skyscrapers, and the back-up puppets for the band. 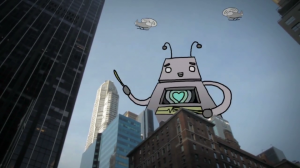 Around the World (And Back) won Best Music Video at ASIFA-East 2011. And on that high musical note, we look forward to seeing who will be joining Bryan in the roster of ASIFA-East winners this Sunday!

For more on Bryan Brinkman, check out his website, which includes both independent and commercial work.