An Evening with the NFB 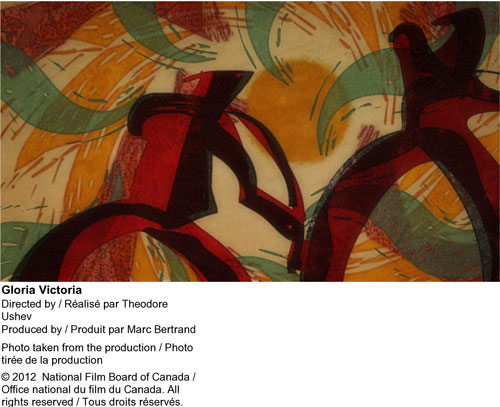 It was a somewhat rainy evening on September 25, 2013 when ASIFA-East members excitedly gathered into the Park Avenue Screening Room to don 3D glasses and view award-winning films from Canada.  Not everyone can make it out to Canada’s beautiful capital city of Ottawa, where the Ottawa International Animation Festival is held each fall.  This time, Canada had come to us.  And it was a fine night indeed. 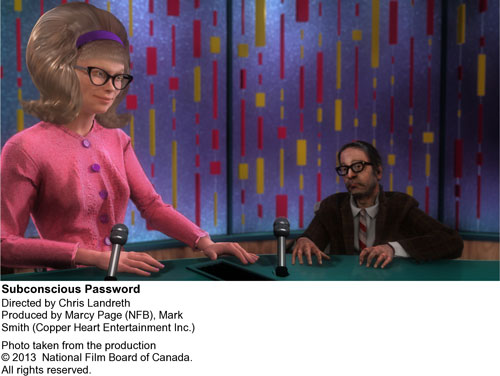 Each year, The National Film Board of Canada takes a few of their nationally acclaimed filmmakers on tour to present their films.  These presentations consist of master classes where films are screened and the filmmakers give a behind the scenes discussion of the making of the films, as well as a Q & A.   ASIFA-East was very excited to be asked host the NY screening, in collaboration with Christine Noel of the NFB and Dimitris Athos of Be Film.  The program featured celebrated directors Chris Landreth, winner of the 2005 Academy Award for Ryan and Theodore Ushev, winner of the FIPRESCI Prize at Annecy for Gloria Victoria.

Ryan by Chris Landreth, National Film Board of Canada

First up was Chris Landreth, who screened Ryan and his most recent film Subconscious Password.    Ryan documents the life of Canadian animator Ryan Larkin and his struggle with addiction and financial hardship.   The Subconscious Password takes the viewer on a game show journey through Chris’s subconscious as he tries to remember an acquaintance’s name.   Chris discussed The Uncanny Valley, “A place where animated characters can seem realistic without quite being real, and where they can be unsettling, smart, creepy, cheesy, funny—or all of these at the same time”.   Films that focus on realism by way of motion capture often have a negative effect on the audience. The more realistic a character, the more creepy and less likeable they are.   In both these films, Chris sought to play with this theory by inserting himself, a real person – not a fictional character – into the film, thereby pushing the audience to engage with the film in a new way.  Chris used Nuke, Maya, Blender, and After Effects to create his films.


Next up was Theodore Ushev, presenting his animated short Gloria Victoria set to Shostakovich’s Leningrad Symphony (No. 7).   Images of war combine with cubism and surrealism in this third film in a trilogy on the relationship between art and power.   Theodore showed us slides of his many posters done in the Soviet Union.   He then moved into making films and designing posters for those films as well.  He told us that everyone is an artist.  All of our art is meaningful to the social garden.  3D was a part of Theodore’s script from the beginning and he found that editing was different in 3D films in that you can’t edit fast since you don’t see the depth.  The film was made using a combination of 6 different programs, including After Effects and Flash.

Gloria Victoria by Theodore Ushev, National Film Board of Canada

Also shown that evening was 2D screenings of:

The End of Pinky by Claire Blanchet

After the event, we all went out for drinks and conversation at The Carriage House.  It was a wonderful evening and I hope we can have more events with the NFB in the future.  Thanks again to all of our wonderful board members who helped facilitate this event, especially Tristian Goik, our Events Coordinator.  A huge thanks to Christine Noel and The National Film Board of Canada, Theodore Ushev, Chris Landreth, Dimitris Athos and Be Film for an amazing evening of Canadian animation.


Chris Landreth and Theodore Ushev pose as if in 3D.