An Evening with John R. Dilworth 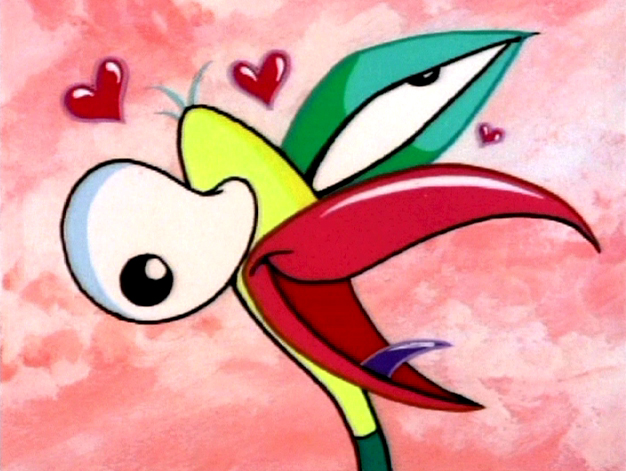 This wasn’t a typical ASIFA-East event. The only thing that made this seem like an ASIFA-East event was it took place in the SVA amphitheatre. This was more theatrical. More unpredictable. This was somewhere inside the mind of animator/director John R. Dilworth. Here, the ideas of silliness and anarchy couldn’t have been more realistic.

John R. Dilworth is one of my idols. I knew his name first before any other New York animator (due in no small part to watching Courage the Cowardly Dog as a kid). The style of that show is so unique and surreal. You can’t predict anything, unless you’ve seen a particular episode more than once. The day I first learned of ASIFA-East, I also learned that Dilworth is an independent animator. I was (and still am) hooked onto his style, his timing, and his ideas.

To start the evening off, Dave Levy reiterated a story from his first meeting with Dilworth. Dave remembered an early adventure right out of school. The details were a little mixed, but Dave recalled being very sad, and then he encountered Dilworth, who said something to cheer Dave up: “GET THE F**K OUT OF HERE!!!”

Linda Simensky, formerly of Cartoon Network, had to send her regards to Dilworth via a letter read by Elliot Cowan. In short, Elliot acted as Linda Semensky’s puppet. Fortunately, Dilworth didn’t give Elliot a hard time for it.

Finally, Dilworth took the mic and started off a DVD, telling his life’s story (or at least the parts we were only allowed to see). After a cute baby picture, Dilworth took us through his student thesis, Pierre. After explaining the short, he brought forth his “guru,” animator/proffessor Howard Beckerman. Howard re-told and justified the story Dave Levy told earlier, ending with “GET THE F**K OUT OF HERE!!!”

Up next was Michael Sporn, after Dilworth showed a fluffy clip from Lyle, Lyle Crocodile. Dilworth referred to the clip as “crocodile pedophilia,” which I guess didn’t come as a surprise to anyone else. Sporn told his story of when Lyle, Lyle Crocodile was made and when Dilworth worked for him. The story of when Sporn had two studios: the good (Sporn’s own studio with his own artists) and the bad (CBS studios). Dilworth went on to praise Sporn for the challenges he offered when they worked together.

Next up was Dilworth’s first opus, The Dirty Birdy. If it isn’t Courage, then it should be The Dirty Birdy that introduces one to John Dilworth. After showing the cartoon, Fred Siebert made his appearance, retelling his (and Cartoon Network’s) worries of turning The Dirty Birdy into a series. The series never happened, but Dilworth got his chance again eventually. Poor Seibert, by that point, had moved on and didn’t get the chance to be hounded by the Silly Dilly.

Now we get to Courage. Dilworth presented his Academy Award nominated short, The Chicken From Outer Space, which is always a good laugh. Straight away afterward was Noodles and Nedd, before which Dilworth’s musical collaborator, Jody Grey, gave a demonstration of the short’s musical cues. Then onto The Mousochist, a funny piece Dilworth insists was spur of the moment. Next up is another grand opus, Life In Transition, still a marvel to watch for its beautiful artistry. For the sake of time, Dilworth was convinced not to explain Life’s symbolism. He moved to The Return of Sergeant Pecker, an erotic and evil piece with spontaneous drawing. Dilworth finally admitted that he made this short, under the name Pierre Delarue, to avoid the ire of someone he made the short for.

Dilworth ended the big screen with a collection of Courage screams from Courage the Cowardly Dog. After the clip ended, we got four big surprises.

First, Dilworth came from behind a chalkboard wearing his famous space-suit.

Second, Courage made a physical appearance. 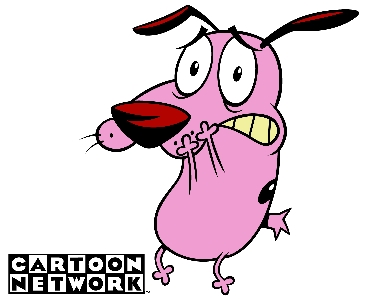 Third, a big surprise with the appearance of actor Marty Grabstein, Courage’s voice actor. He offered his roast of Dilworth, and ended it with a loud Courage (-eous) scream. And everytime Courage screams, I can’t help but lip-sync to the scream as well.

Fourth, Dilworth invited a band to play. This band had an acoustic punk/bluegrass sound, and memorialized Courage with a song.

This evening was certainly very unique, and by far the best ASIFA-East event of the season. Everyone got to laugh, got souvenirs, got to meet Courage, got to watch Dilworth drink from a couple of flasks, and I think we were all reminded that animation knows no boundaries. Neither does Mr. Dilworth.

A great evening. We all love John R. Dilworth. Thank you for reading this. 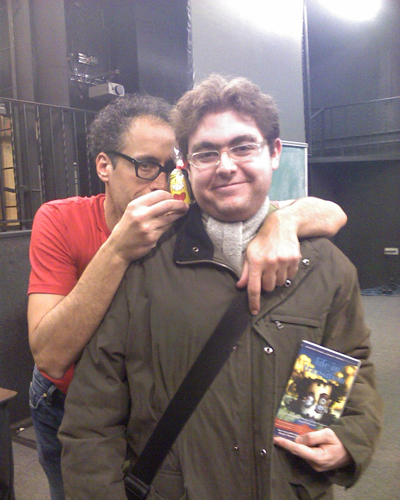 NOTE from the Editor:  If you took pictures of this amazing event, please feel free to post them online in our ASIFA-East Flickr group:  http://www.flickr.com/groups/asifaeast/.  All members are invited to join.