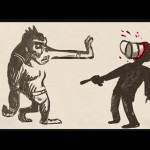 This just in from our friend Gary Lieb!

Just wanted the ASIFAEAST community to know that “my” film American Ultra (2015) opens tomorrow everywhere. I spent the first 6 months of 2015 hand drawing 3 minutes of animation for this action/gore/comedy/romance/spy thriller.

At the end of the film it busts into a cartoon/end title sequence featuring Mike Howell’s (stoner cartoonist played by the great Jesse Eisenberg) comic book creation Apollo Ape killing loads of people and creatures in gross ways. I had a great time working with the director and he encouraged all my weirder impulses. I also did a prop sketchbook seen on camera when Mike is drawing stuff, as if cartoonists smoked weed and drew in their sketchbooks all day, so unrealistic 🙂

I have some production art up on my tumbler blog.