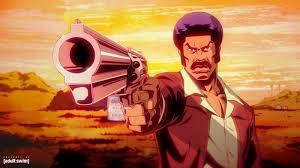 Our friends at Adult Swim are hosting a panel and preview screening at ABFF in NY this Friday featuring Black Dynamite, their animated series starring Michael Jai White, Byron Minns, Kym Whitley, and Tommy Davidson. The series is produced out of Burbank, CA at the Cartoon Network Studios.

Black Dynamite, the hit animated Adult Swim series is based on the 2009 critically acclaimed feature film and chronicles the exploits of the central character, Black Dynamite (Michael Jai White) and his crew. Attendees will get an exclusive first look at the upcoming second season as well as a behind the scenes look at how the show is put together, followed by a question and answer session with cast and producers.