Am I Truly the Last?

Posted by Tristian on Oct 4, 2013 in Feature Articles | No Comments

[Editor’s note: This movie-review was written by my friend Ivey Ao, a cool animator from Jackson Heights.]

The Last Unicorn (1982) was shown for the first time in a gorgeous new 2K Digital Cinema Print, looking absolutely stunning on the big screen. Peter S. Beagle, the writer and creator of The Last Unicorn novel, was the special guest at The Last Unicorn Screening Tour, September 30th at City Cinemas East 86th Street. The story is about a unicorn on a quest to search for others like herself, and on the way she encounters adventure, romance and heartbreak. Though not as renowned as any Disney film, The Last Unicorn has gained a massive cult following and the movie itself has a charm of its own. A bunch of cos-players were waiting in front of the theatre for the movie to start; the most notable was the one who wore a realistic unicorn head. Before the movie premiered, there was a Q&A with Peter S. Beagle himself. He told us a rather humorous story of how he was able to get the book written and published. 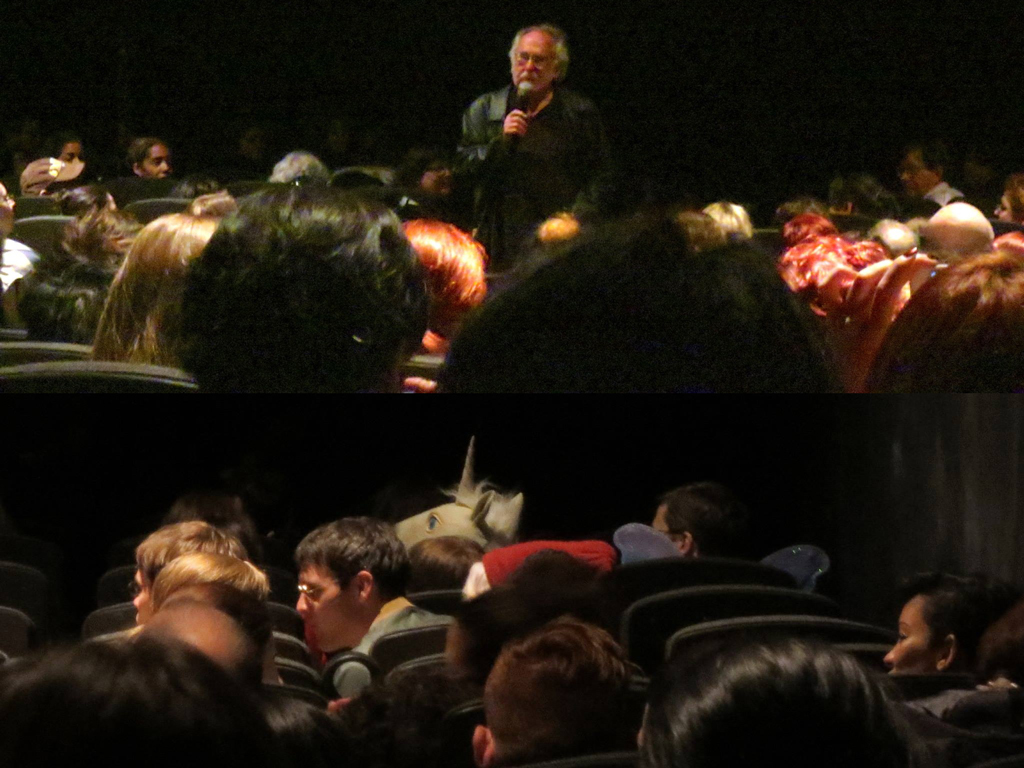 Peter grew up in the Bronx where he enjoyed playing in and exploring a lot of New York City. He started The Last Unicorn when he was 23 years old, and nearly quit after 85 pages because he felt like he didn’t know what he was doing. But he somehow managed to complete the book. Peter told us to drop the idea of the “aspiring” writer, saying that if you write, you already are a writer.  Writing and publishing are two different things.  It’s easier to write when the ideas are flowing, but it also takes discipline to sit there and write even when the ideas aren’t flowing.  Beagle also said that he never learned anything until he did it wrong. I think the same logic can be granted to any other kinds of art.

Peter said he hated writing Two Hearts (the short story sequel to The Last Unicorn) but he intends on picking it up again and developing it further. That will be good for all the fans, since The Last Unicorn possibly is going to get a full sequel. His two personal favorite characters were Molly and the singing Butterfly. Molly he likes because she is based off a lot of women he knew who had grown bitter with life, and the singing Butterfly because writing songs was the ONLY part of the novel he enjoyed writing.

Peter wrote the screenplay for the animated movie of The Last Unicorn. He actually knows quite a bit about animation: “Animation has no time for back-story, unlike a novel,” he said. “There are things you have to take out.” Peter states that his influences were The White Deer, children’s books, and to some extent, J.R.R. Tolkien.  There might be a live action adaption for The Last Unicorn. According to Peter and his assistant Phil, the person who has the rights is not competent, so they need the rights. They stated that even if you are not religious, to PRAY that they get the rights to the movie.

Overall the screening was great!  The film looked gorgeous in 2K print and there is a promise of a sequel and more work coming from Mr. Peter S. Beagle.  If you missed this event and want to meet Mr. Beagle, you can visit him at this year’s Comic Con in New York City. The movie deserves more recognition than it gets, and it’s a movie all fans of animation should give a shot.