A Visit with Animator Dustin Grella

Posted by Richard on Jan 19, 2012 in Feature Articles, Interviews | No Comments

This month, I visited with animator/filmmaker Dustin Grella, whose film Prayers for Peace won an ASIFA East award (and several others) last year. I’ve been speaking with several East coast animators, asking them how the industry has been treating them, whether or not a career in animation is still viable for independent filmmakers, and what their relationship with their work means to them.

Dustin’s films are personal, sophisticated in their visuals, and elegantly emotional. I visited Dustin at his studio/home downtown a while back, and got a glimpse into his process. I hear he makes a mean cup of hot chocolate, and sometime during the winter season I’m going to go back for a cup…when he least expects it.

Motivational speaker Tony Robbins once said, “Any life worth living is a life worth documenting.” Sadly, this often means that anyone with a video camera and an opinion believes they can call themselves artists: it’s easy to “record and post” online, but many “filmmakers” have little of value to share.

Dustin’s work is thoughtful, sometimes troubling and sincerely entertaining…and though he isn’t primarily documenting his own life in his films, he is speaking truth about the lives he encounters. More often than not that truth is respectful, even when it’s absurdist and macabre.

His most recognized work, Prayers for Peace, was inspired by the death of Dustin’s brother, Devin, which occurred in Iraq in 2004. Grella uses stark but lovingly realized imagery, mostly rendered on a chalkboard, to record his brother’s last days, final communications, and impact on those he left behind.

“At first, I was going to make a very angry, very political film” Dustin says. “And then I considered that my parents would be seeing this, and I wanted to make a film they could assimilate.” I asked if this meant the final film was something of a compromise.

“I thought about that,” Dustin told me, “but in the end, no. I wanted to honor my brother. I wanted to process his identity as a man, and as a soldier: two facets of him I never knew or related to. It [the film] is really more my tribute to him and my growing to understand him than a statement on his death, or the war.”

In that regard, Prayers for Peace is an intensely personal statement, but the connection people make to it feels universal. It is a sad piece, but the painterly beauty of Grella’s approach is powerful. The film is a dense, classically-designed series of visuals which sometimes blend into each other (as memories do, and as emotions of grief seem to ebb and flow). The chalkboard process gives the story a haunting feeling of impermanence. I felt this was intentional. Dustin’s brother died very young, and the erasures, disappearances, and morphing in the film’s visuals say something about the transient nature of life and of the brevity of our time here. That theme is one Dustin knows well: a serious injury that occurred when he was in his early twenties makes it difficult for him to travel, but he claims the accident started him on another phase of his life: one in which his art, which he’d abandoned for a while, returned and claimed more of his psyche and his time. In some of Grella’s films, we can see the evaporation of the sponge erasures. It marks the time it took to create the films, and is a reminder of the inevitability of decay, decomposition, and transition. The images themselves live, then die: it’s compelling and unexpected, even in animation, to see the actual art wither and expire as the frames play out. From time to time, when the slate has been wet down, one can see the reflection of the artist on the screen. It may be unintentional, but it is, like nearly everything else in Grella’s work, subversive and confessional. 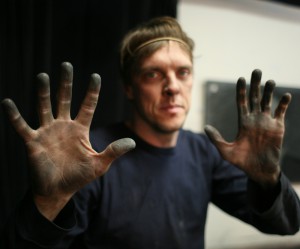 Animation is sometimes a messy business: Dustin Grella during production

“I like true stories,” Dustin told me, as I spent some time with his pet cat (who shows up in some of Dustin’s films, which you can see online). Those “true stories” are only sometimes from Grella’s own life. One of his longest running and most viewed projects is a series of short films, completed usually in the space of a day, in which he visualizes messages left anonymously on his answering machine.

Some of these are hilarious, and they are all compelling for one reason or another. But what seemed to me the link between these short films is the respect Dustin has for the people who share their secrets with his machine. He’s never intentionally cruel or judgmental, though many callers shoot themselves in the foot before even dialing with the unconscious absurdity, narcissism, or delusion they bring to these “drive-by” messages.

Dustin’s studio is an intimate, cluttered, clearly well-used space, in which a slate, attached to the far wall, rests opposite a small digital camera. His lighting setup, I noted, was uncomplicated, even crude, but the finished films look quite polished and handsome. Recently Dustin has switched over to high-definition recording, because, as he says, “If you’re going to spend all that time and effort, why not have the work recorded as faithfully as possible?”

Many animation “artists” hide behind the word “Style” to defend sloppy or incompetent work. I was very impressed with the beauty and formality in each of Grella’s thousands of sketches: Gothic cathedrals, detailed street scenes, bleak Iraqi landscapes, and sometimes special effects which are startling in their complexity and believability. This guy can DRAW.

“Yeah, but sometimes, I get lazy,” Dustin told me. “I mean, there are times, when things kind of just…sit there, and you can see I was tired that day, or just didn’t have the energy, or whatever.” He’s entitled: the sheer volume of art his films require is daunting. I sometimes wonder if he regrets erasing every single image he creates, even though they have by that time been recorded for posterity. The chalkboard technique is not a common one, and a part of the appeal of Grella’s work is that it is singular in its look and feel.

“Some people warn me against sharing too much of my process, or technique,” Dustin told me. “I have no problem with people knowing how I work. I’m not afraid anyone’s going to ‘steal’ my secrets. Hey, if you want to spend sixteen hours a day leaning over a blackboard, erasing with a wet sponge, doing thousands and thousands of drawings to get something right until your hands bleed and your skin cracks from drying out from the chalk– go right ahead, in fact, welcome to the club!”

That almost obsessional devotion to sequential art is, I believe, an essential component to a career in animation. What seems to kill the dreams of most young animators isn’t that they can’t draw (though precious few of them can) or that they don’t have a “vision” or a “dream”. What seems to be the major hurdle is the inability to face the boredom/repetition/labor that animation involves.

Grella understands obsession, and devotion. He has, for the past several years, been writing letters to himself– and mailing them. I saw in his studio boxes upon boxes of these unopened documents. I asked if they served the function of a journal, and Dustin agreed, though unlike the journals I write, he doesn’t revisit his writing. “It’s a moment in time, and then I’m past it,” he told me. I’m not sure if he ever will read those letters, but for now, he seems to have his hands full with the series of “confessional” phone call films that come with surprising (and admirable) regularity.

“My first film was an ‘art film’.” Dustin told me. “It was about the artist Willem DeKooning, and it was very dense and obtuse. My parents saw it, and they just didn’t relate to it or respond to it. Like everyone else, I had to learn filmmaking. How to use the camera, how to use the software, how to tell stories. I had taken some life drawing classes when I was young, in Akron, Ohio. After that, I needed to…be out of Ohio, and so I came to New York, and led the Bohemian life of a young artist. After the accident, everything changed, but a second stage of my life began. I had completely abandoned art, and all of a sudden, there it was again.”

Do his parents “get” his films now? “They do,” Dustin laughs. “But I still experiment. There was a moment in Prayers for Peace in which I rendered a jeep on fire, and I wondered if I got too abstract or ‘arty’ with it. I feel sometimes when you go too far, it isn’t valid anymore. It isn’t representational, and in that film, which is almost documentary in its approach, I wondered if a stylized scene was contradictory.”

I didn’t find the scene jarring, probably because I found myself so intrigued with the novelty of the chalkboard technique in the first place. My own experience with animation is that although I love it as an art form, it isn’t something that comes easily to me. Every drawing feels like a struggle, and I would be lost without the previous drawings and the extreme poses that guide me to the final scenes. Dustin works without this support system, and I found it impressive how he is able to imagine the next pose, drawing, or scene, even when there is nothing left on the board to guide him to the next image. His work is surprisingly tight considering how dissimilar each frame can occasionally be, from the one preceding it. 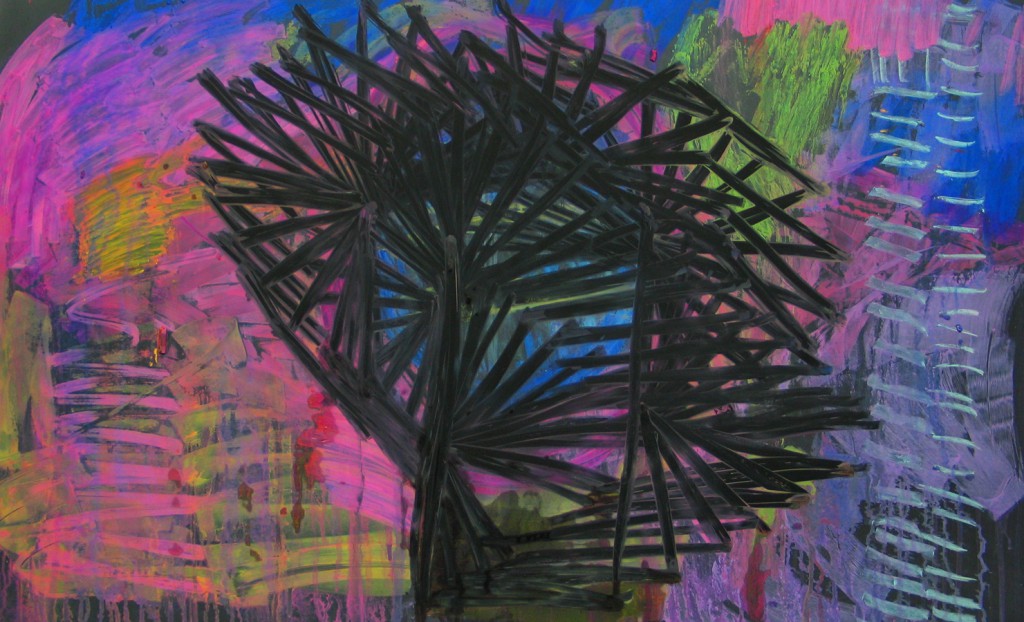 An abstract image from one of the "Animation Hotline" shorts

Prayers for Peace has won over forty animation awards, and so Dustin’s profile (at least within the industry) has been raised. This has led to work, and other commissions. Sometimes the medium is pixilation, sometimes the chalkboard, but the binding factor is a playfully irreverent sense of the subject matter.

“I have a really supportive group of friends here in New York,” Dustin says. “I had a tendency to give things away, not to charge as much as my time was worth. I have a good friend who told me, ‘You can’t ever, ever make another business deal without talking to me first.’ He really helped me to be able to speak truthfully and easily about what making a film like this incorporates and what my time and energy are worth.”

Dustin was grateful for the ASIFA nod, and he’s met some interesting people in New York animation. I didn’t get the feeling he has any intention of slowing down, and for as long as there are people out there who are willing to speak to his answering machine, I doubt he’ll run out of inspiration.

I’m thankful to Dustin for inviting me into his studio and his thoughts. I enjoyed our visit and found his artwork and films worthwhile. Dustin’s work can be seen online on Vimeo, and his “answering machine” project, which is ongoing, runs daily at www.animationhotline.org.