Posted by Richard on Oct 24, 2011 in Feature Articles, Interviews | 8 Comments

We meet with some new faces (and forces) in Animation.

Animation is changing: this isn’t news to those in the business, but ASIFA East is changing, too. You’ve noticed we’re online now, and that we communicate via our blogs and websites. The ways in which people receive information—about jobs, the industry, events, and their place in the animation field—are changing, too, and many young artists are worried about finding employment in an uncertain economy.

In the next few months, we’re going to try to speak to some of the newer ASIFA members and to some up-and-coming practitioners, to get their perspectives on the state of the industry, the state of their art and of their careers, as we all move into a new era.

This week I spoke to Jessica Polaniecki, whose short film, To Have and to Hold, won the first place award at this year’s ASIFA festival. It’s a stop-motion piece about the journey through life a woman takes…and how her possessions take the journey with her. Polaneceki’s film is wistful and engaging, and suggests when we take care of the things we love, they may eventually take care of us. 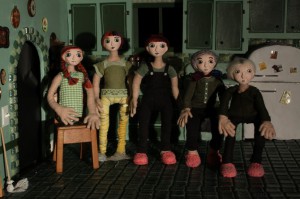 Various stages of the main character's life, in stop-motion form

I sat with Jessica at Molly’s pub, and asked her a few questions. My first was a practical one: is there a future in stop-motion, especially here in NY?

“I like a cacophony,” Jessica told me. “I’ve had so many different jobs, and have done so many different things. Some stop-motion, but some design work, some installation art, freelancing, even nannying. I’ve been busy since I graduated, and so far haven’t had to think about where the next job is coming from.”

Having done some stop-motion, I agree. Even in animation, stop-motion is a specialized skill set. At SVA, where Jessica went to learn the craft, the department is small, but managed by a dedicated crew of practitioners who focus on an average of six or seven students. Jessica told me she was glad to have Signe Baumane as a thesis advisor, “because she gave me honest feedback, which is so hard to come by, in any school environment. Often times, teachers—and other students—are afraid to speak up, to criticize, for whatever reason. Maybe they fear hurting your feelings, or maybe they’re just not sure about your work. But Signe called me on things she felt needed tweaking or improving. I know I was better because I worked with her. Even when she was out of the country, I’d email her and she would send paragraphs back.”

I listed several films I’d been inspired by. Jessica knew them all: this was a relief to me, since so many times I’ll mention things like Mad Monster Party and students look at me as if I’m from another planet. It can be frustrating to meet people who claim to be passionate about the art form, and then have only ever seen The Nightmare Before Christmas. Jessica told me she enjoys the older, “retro” films, because “they look like stop-motion,” by which she means the process has not been so refined and manipulated that it resembles computer art.

“One of my teachers encouraged me to shoot on twos,” Jessica says. “I had always thought that stop motion had to be on ‘ones’ but my eye really doesn’t see the difference when it isn’t. I think it looks more like ‘stop motion’ when there are these little spaces between. I was taught if there’s something due at the end of a class, then to shoot on ones can be counter-productive, and can work against you.”

Jessica isn’t advocating “cheating” nor does she approach her work in that way.

“I had eight internships before I even graduated,” she laughs. “I worked in all different kinds of places, and it taught me to be adaptable. What I really enjoy is a creative use of material. Sometimes that means making a stop-motion film, but I discovered how much I enjoyed building the miniature sets for my film, and I can see myself doing set design in ‘real’ scale,” Jessica says. “About the only technique I’m really not thrilled by is clay animation. It seems too rudimentary, and simple. There isn’t much I like to do with it.”

How did she acquire all the tiny props for her award winning short film? “I so wanted to make them all myself, and I suppose I could have,” Jessica says, “but that would have taken so long. I found many of the items on my list at flea markets around the city. Tons of things: tiny trumpets…and it made the job much easier.” 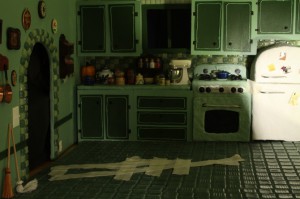 One of the intricate sets from Jessica's film

Since I have been writing for ASIFA, and especially since I have been teaching, I’ve met dozens (perhaps hundreds) of young people who are discouraged by their experiences (or lack thereof) in the business. The prevailing feeling, especially in students I currently encounter, is that there won’t be jobs out there when they graduate…and animation is already an “art” field, where money isn’t known to flow. How has Jessica managed to survive and thrive?

“Oh, I say yes to everything,” she laughs. “Signe taught me that. That you have to network. You just have to know everybody, because those friendships are where the jobs and opportunities come from. …When I was first in school, I had those moments of doubt, where you think ‘oh, God, I can’t do this…I’m not any good at this…’ but then they pass. It all kind of works out. I’m pretty happy with all the work I’ve done.” 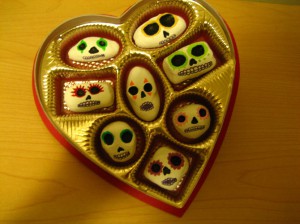 Some more of Jessica's imaginative miniatures

Saying “yes” to life is a great quality… but hasn’t Jessica had some…well, crappy jobs, too, because of it?

“That’s the benefit of freelancing,” she shrugs, dismissing the negative stuff. “If you have a difficult boss, or if the project is a bad one, it’ll be over in a month or two, and it’s all experience. You get more skills.”  One of her first assignments was a commercial shot in Seattle for a major technology firm. It was backbreaking, exhausting work on a full scale set, but the final piece turned out well, Jessica says.

Those skills will come in handy next month, when Jessica travels to England with a show she’s been invited to work on for the Whitney Biennial celebration. For this show (which Jessica will also be performing in) she’s making a life-sized elephant puppet that will be shipped in pieces to the venue. Currently, it’s living in her apartment, presumably in the middle of her bedroom furniture and sets for an upcoming short film.

“I never thought I wanted to be in ‘fine art,’ Jessica says, “and here I am with the Whitney event, and it’s a big deal. I love it.” She’s also worked on a line of ‘edible jewelry’ which will soon be on sale at Barneys.

It’s a full schedule for someone recently out of college, but on some level this appeals to Jessica, and feels like the right place to be. I asked her what advice she would give to other students– and was reminded of a very soft-spoken student I had some years ago: a young woman who was serious, dedicated, but extremely quiet in class. When I spoke to this young woman about her complaining classmates, and the ‘struggles’ they were having with even the simplest exercises, she shrugged and said, “if they didn’t come here to work, they should get the f*** out.” Well, I roared with laughter, not just because it was the last thing I expected from this politely gentle artist, but…but because I agreed with her. Do people come to college to be challenged, or to be rewarded for showing up, or coddled for being “clever” enough to get in?

“Students should know– I’ve made a living,” Jessica says. “Maybe not consistently from stop-motion work, but I’m constantly working. Andy London was another great teacher. He and others, like Eric Eiser and Biliana Labovic, reinforced the idea of networking, knowing people, constantly improving, and being available for work. Stop-motion is really not a lucrative field…unless you wind up working for a major studio. It’s also a field where you need to learn so many different things, like set design, character design, lighting, costume creation. But I’ve been busy since graduation, and I don’t see that slowing down any time soon.”