A Nom Nom Nom A Lisa

Posted by Tristian on Oct 16, 2015 in ASIFA Events, Feature Articles, Uncategorized | No Comments

Is it strange that everyone sounds the same, or that the concierge can type while maintaining direct eye contact?

On Tuesday Oct 13th, Paramount Pictures held a special screening of Anomalisa, in the heart of Times Square.  Anomalisa, based on a play of the same name by Charlie Kaufman (writer, Eternal Sunshine of the Spotless Mind) is the story of Michael Stone, an expert in customer service who has a mid-life crisis, and Lisa, an ordinary girl who isn’t particularly beautiful, or particularly smart.  Following the screening was a Q&A moderated by Jonah Hill (writer, 21 Jump Street) with the co-directors Charlie Kaufman and Duke Johnson (director of Community‘s episode Abed’s Uncontrollable Christmas).  ASIFA-East was one of many organizations invited to attend, along with the Writers Guild, Visual FX Society, Producers Guild, NYU Film students, and more. 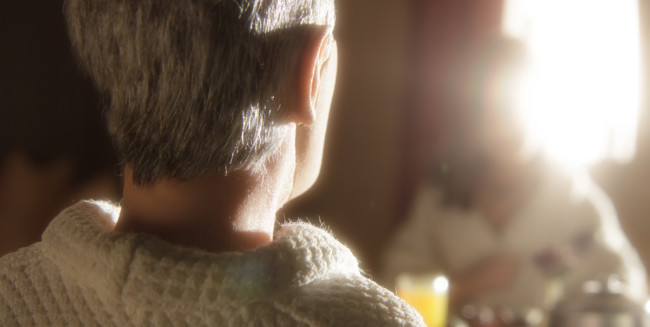 The Fregoli Delusion is a peculiar mental disorder in which someone believes that everyone else in the world is actually the same person, but in different guises.  In Anomalisa, Michael checks in to the Fregoli Hotel in Cincinnati for a one night, but he does not really have this disorder.  Kaufman just thought it would an interesting way to view the world. And I like this world.  3d-printed puppets, with facial seams left intact to keep a hand-made style.  Lighting that warms their cheekbones, either in dim sunlight from airplane windows or the glow of hotel lamps.  Reflections of almost too human eyes.  The film was filled with remarkable moments of recognition, stirring delight in animators with a simple scene of someone putting in Apple earbuds.  Or a man freaking out in the shower over water that was too hot and too cold.

Everyone that Michael (David Thewlis) meets has the same voice (of Tom Noonan) except for Lisa (Jennifer Jason Leigh).  It heightens the emotional stakes of something as ordinary as reconnecting with an old lover.  In this case, the lover Bella sits nervously in her form fitting sweater, a man’s voice coming out of her mouth, but the sounds amplify her feminine and hopeful double-take while she and Michael drink martinis.  The directors had a layered approach to giving acting notes.  They used “pop-thrus” created by the animators which were quickly animated versions of the shots.  Nothing was really left on the cutting room floor because the production was so front-loaded and tightly scripted… no room for 2nd stakes in an indie stop-motion film. 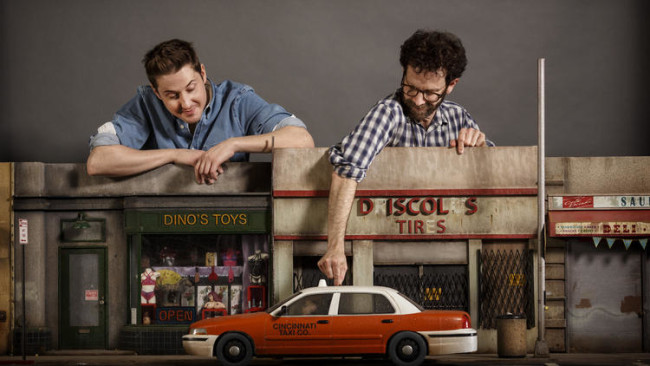 As Michael settles into the hotel and attempts to gain some ground over his fading family life and even paler romantic past, he eventually meets Lisa and her friend who are also there for the book tour.  After a few too many apple “moeee-heee-tooooes” Lisa goes up with Michael to his room.  Her tone has been crushingly shy and demure, damaged and lived in.  She seduces Michael with shaded eyes and an inability to believe in her own worthiness.  Michael finds her voice enchanting and to please him, Lisa sings a dirge like version of Cyndi Lauper’s “Girls Just Wanna Have Fun.”  What follows is a sex scene that is intimate, moaning, tender, shaded, needy, naive, cute, real hot and unsafe.  The animators at Starburns Industries, Inc. developed new “dragon skin” for the naked puppets (which stood about 12″ high) with a soft core that enabled the skin to fold naturally as the characters bend.  Glycerin was applied liberally to maintain a wet look.  While the studio took about 3 years to complete the film, at around 2 seconds a day, the whole sex scene took almost 6 months to animate.

As with almost all hotel hookups, things went downhill for Michael and Lisa after that.  We follow them through the morning-after and the big customer service speech, and our focus is slowly deconstructed.  I don’t think Anomalisa is about Michael at all actually; instead we see something more of Lisa.  Michael is based off of Kaufman’s ex-brother-in-law, while Lisa is a girl in an L.A. bar, and the rest of the puppets are an amalgamation of everyone in the animation studio.  The voice actors were video recorded as they recited their lines together in the studio.  They influenced the Z-Brush sculpting of faces and phonemes (over 150 facial expressions).  Perhaps there was some video for the sex as well. 😉

The play’s expression comes out in Michael’s removal of his own puppet jaw, something completely original to the adaption from the St. Anne’s Warehouse sound play.  Kaufman was originally opposed to animating this President-Bush-era story (set in 2005) but he eventually saw it as an opportunity to use different tools to tell a story about emotions.  The script was identical to the play and the only difference was in the visuals. 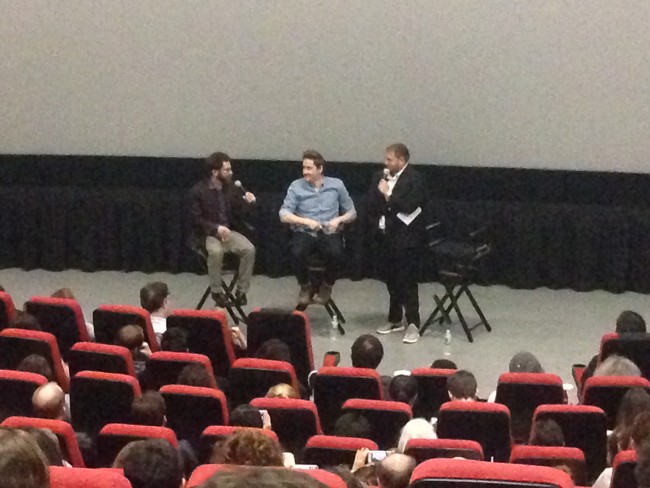 Jonah Hill was the night’s somewhat surprise host.  It has just come to my attention that there were other Hollywood celebrities in attendance that were quickly and quietly shuttled in and out of the movie as the lights turned.  “I’m not a moderator,” said Jonah, “but I respect [Kaufman and Johnson] so much that I can commit to a new job.”  And commit he did, abandoning his junky-public-theatre director’s chair to the air, deriding the other host’s attempt to fix it, and encouraging Kaufman to give up his own broken chair.  Hill also may have thrown out an entire set of questions from the Producer’s guild, or secretly used them in a grand act of debonair.  Hill expressed his fascination for the film when he found it in pre-production, and told us he had never seen it before that night’s screening.  (Perhaps he is also friends with fellow comedian Dino “Starburns” Stamatopoulos and Dan Harmon, who saw the play).  Further clouding the mystery is the appearance of BJ Novak in the credits, under one of the over 5,000 Kickstarter contributors.  I suppose it was rather “serendipitous” of all these people to meet.   Perhaps they were drawn together by the story’s “dreamlike qualities,” as Hill said.  Hill believes that Anamolisa has “more natural qualities than most live action films.”

Anamolisa turned out for more romance and humor than I was prepared for.  Between the cute racial jokes and the unique portrayal of Mid-American personalities, I would gladly see it again.  Part of me is reminded of the opening scene of Being John Malkovich and it is nice to see Kaufman fully embrace the world of animation.  Anamolisa will have a limited release in NY and LA on Dec 30th, and across the US in January.