A night of Dark Toons, under the stars at Rooftop Films 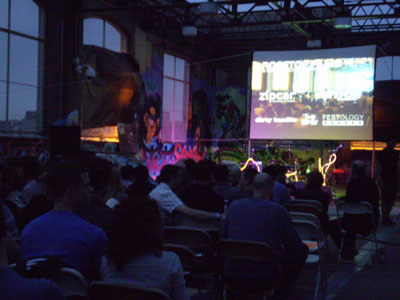 On Friday, May 28, Rooftop Films presented  a series of short films with the theme “Dark Toons“.    This intriguing mix of films ranged from the chaotic train ride that is Cordell Barker’s Runaway to a short treatise on big, juicy, tasty hot dogs appropriately titled Sam’s Hot Dogs by David Lopez Retamero.  New York’s own Jake Armstrong’s, The Terrible Thing of Alpha 9, was also featured.  His wonderfully ugly yet adorable monster got a lot of laughs.  About a dozen animated films were presented, and although not all were my cup of tea, the majority were really interesting takes on a dark or disturbing subject.   I had not seen the majority of them and it was a very international mix.  The event took place at an amazing venue at the Open Road Rooftop above New Design High School in the Lower East Side.  The space is huge and covered in graffiti murals all painted by the students who attend that high school.  Those same students were cooking hot dogs and hamburgers, the proceeds of the sale of which was going directly to the school to fund activities.  The students are quite the artists and I really enjoyed looking at all the murals and watching films in such a colorful space.  The films were preceded by a performance from a fun Canadian band called Braids.

Rooftop Films presents around 45 films all summer along, on rooftops throughout the five boroughs.  Director Dan Nuxoll has generously offered ASIFA members a discount on tickets for the following shows.   Look for this code in our next email newsletter blast!  If you did not receive this code, please contact me and I will send it to you.  (Select Events Blogger.)

On June 26, a screening of Brent Green’s Gravity Was Everywhere Back Then, with a live score performed by musicians, including members of Fugazi: http://rooftopfilms.com/2010/schedule/20-gravity-was-everywhere-back-then

On Thursday, July 29, a program called Capucine and Other Filmmaking Renegades which includes a film by animation renegade Nieto: http://rooftopfilms.com/2010/schedule/31-capucine-filmmaking-monkeys-and-other-renegades

These are not the only shows featuring animation so I suggest you check out the site to see the entire festival schedule!