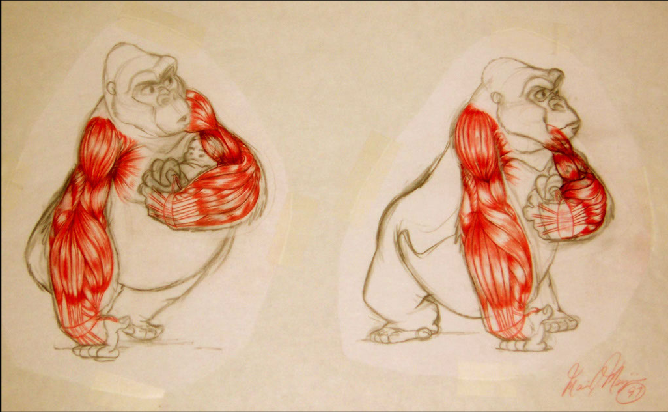 ASIFA-East’s last event of the year turned out to be a pretty optimistic one. We enjoyed ourselves in the company of Mario Menjivar, a former Disney animator of more than 15 years before returning home to New York City. From what was gathered, Mario appears to have lived an enviable dream of many New York animation students: to snag a position in the esteemed Walt Disney Animation Studios, despite not having gone to CalArts, and getting to work on Disney’s animated feature films.

The evening began with Dave Levy introducing Mario, and then presenting a reel consisting of Mario’s feature animation work. This reel includes pencil tests from Tarzan (1999), Atlantis: The Lost Empire (2001), Treasure Planet (2002), and Looney Tunes: Back In Action (2003). Some impressive stuff, this reel can be viewed on Mario’s website, along with countless drawings, both personal and commercial.

Mario recounted his upbringing in the south Bronx, and later studying Animation and Illiustration at SVA, before making his way to the Art Students League. We also get a bit of a cultural history of the opinion surrounding animation from Mario’s point of view. And one of those is how in (approx.) 1986, animation wasn’t considered such a hot topic (the Disney Renaissance was just a few years away). After some encouragement, Mario got picked up for a three-month internship in Disney’s “Boot Camp.” Here, Mario learned a curriculum that he now teaches to his own students. After those three months ended, it was back to illustrating in New York before Disney was ready to hire him some months later for the Florida Studio. Of particularly envy is Mario’s mentioning of how the company took care of him in the beginning, sending out a truck to move him and putting him up before he managed to find his own apartment. Mario’s first big job for Disney was cleaning up the tussles of the Magic Carpet in Aladdin (1992), which he describes in great excitement. He later got his chance at the L.A. studio, with the help of Andreas Deja.

The evening was full of optimism and pleasant reflection, which is kind of ironic considering what is known now about the inner workings at Disney. It felt like Mario was handing out plenty of helping anecdotes from and about the “big guns” of Disney animation. One of the best anecdotes of the evening (or at the least the one that stands out best) is from Glen Keane: “You never stop learning. The day you think you know everything, you’re not an artist anymore.” This quote led to Mario’s warning that while working at Disney, it is easy to lose your own drawing style in trying to figure out Disney’s style, and in turn your drawings look like everybody else’s.

The Q & A part at the end turned out to be very informative (more so than usual, probably because we are all animators here). Throughout the evening, Mario described working at Disney in a very positive light, and that the reported horrible conditions are very recent. Mario admits that Disney has changed recently due to Union issues. He also offered some clarity as to why most studio systems are so rigid, and why they make the decisions they do. He also stated his belief that Disney was still using the same directors from the last 20 years, and that maybe they are a little out of touch with a new generation of artists.

All in all, a nice evening. And a great way to end the year. Mario was laid-back and optimistic, completely different from how most Disney animators are described. He also reminded us that we are all students, and are always learning. His website is definitely worth checking out, for both his personal artwork and the pencil tests in his reel.

And with that, the author of this article wishes you all a Merry Christmas, Happy Holidays, and a Happy New Year.