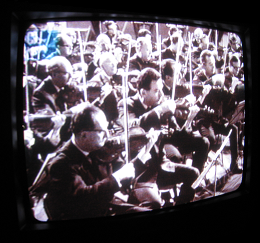 It’s the start of a new season for ASIFA-East.

For this author, as well as many others, this new season is particularly special, as it is the first with our new president, Linda Beck. Linda, who had previously been the ASIFA-East secretary, has succeeded David B. Levy after an 11-year run. It is a new era for us.

The Open Screening, however, cannot be judged cohesively or clearly, as most of the works presented are incomplete and still in-progress. There is no submission process, hence the “Open” part of the title. Attendees simply arrive with a DVD copy of their work. What we can judge are the general trends amongst the films. The general mood everyone is going for. A “sign of the times”  animation study you could say.

My review of the Open-Screening is this. There was quite a stark contrast between the tones of everyone’s work, particularly between dark, serious work and funny, colorful, upbeat work. There were only a couple of places where the two seemed to meet, but not altogether. The first two clips of the evening set this tone very clearly: Alisa Stern’s toothbrush commercial, portraying a ballet of colorful toothbrushes and electric brushes; followed by Alex Torres’ A Dark Plummet, a dark, hand-drawn noir piece with brooding overtones. One clip that fell between these two tones is Signe Baumane’s preview of her forthcoming feature Suicide, a humorous take on the tender subjects of depression and suicide (Signe insists the subjects are very personal to her, and from her own experience, they are fair game). It seems that humor in today’s world takes on a very pessimistic and cynical tone (something the author has been guilty of and regrets). Another clip that falls in the middle is Rob Yulfo’s internet hit 127 with Wile E. Coyote, combining a loving tribute to Chuck Jones’ characters with a parody of a very serious-themed movie.

Another trend I noticed are shorts/clips that tackle individual obsessions, no matter how disgusting or inappropriate (something I started to notice in this past year’s Festival Judgings). Simone and Danny Dresden’s Made You Cringe series is a collection of clips that each accomplish the task of making the audience laugh before ultimately revealing themselves to be sicker than we are led to believe (Andy London appears to have a lot in common with these filmmakers, as he was there supporting them). Another short in this category is Elliot Cowan’s Clinically Insane clip for Fox, involving some very humorous but psycho-sexual obsessions.

Also, with the exception of a couple shorts, it feels like everyone is going for more experimental tendencies in the design, process, and storytelling. That, for me, is probably the most exciting notice of the evening. Among these experimenters were: Tristian Goik and Linda Beck’s individual films of visual symbolism; Brett Thompson’s Fluidtoons (#4 in the series), which combine colorful Keith Harring-like illustrations with a stream-of-conciousness fluidity; and Bob Lyons continues to deliver his collaborative experimental projects involving traditional pixelation, time-lapse, and paint-on film. Experimentation has been, and should always be, a key to our art. And it is good to know that that is still case amongst some animation artists today.

As mentioned before, most of these clips are works-in-progress, although there were a handful of finished works. As such, we can only critique most of them for feedback. For feedback (and curiosity), check out the list of the evening’s films.