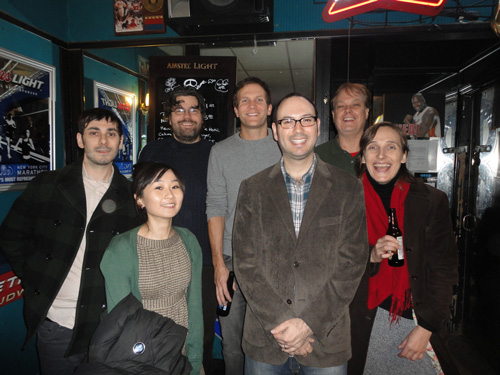 The night started off with Bill Plympton’s experiment in international collaboration “Guard Dog Global Jam.” Based on Plympton’s  own “Guard Dog” (which earned him an Oscar nomination), “Guard Dog Global Jam” was the effort of seventy animators to re-create 2-4 seconds of the short, in any style. The project’s producer, Desiree Stavracos explained that the first seventy people to apply were to choose three scenes they wanted to work on. From there, everyone received one of their three picks. The result: a visually dynamic representative sample of the work that can be created by people who are given a chance. As Stavracos explained, some pleasantly surprising elements of working with a wide array of artists were the lack of technical confusion, the wide range of skill levels and techniques (including a great deal of mixed media animation) and a very limited amount of 3D animation.

The project is a huge success and a brilliant idea on many levels. For one, by using an already successful short, Plympton freed the animators of the worry of pre and post production allowing them the time to truly flex their animation muscles on a project that he can guarantee will come into fruition. With this project, Plympton has allowed everyone from a ten year old budding animation artist to seasoned animation professionals the chance to learn about their own abilities.

A sneak preview of Dave Levy’s “Grandpa Looked Like William Powell” was up next. Though I’d seen bits and pieces, it was a treat to see it all put together. The live action images of his grandfather’s high school autograph book was taken using an iPhone, and Levy animated right over the footage. Levy explained his process as being very stream-of-conscious. Recognizing that planning is something we all have to do regularly anyway, and that excessive planning in personal work sometimes hinders development, Levy approached this film by straight out narrating what came to his head and then animated to it. The plot rode the natural loops of the human memory, sometimes describing things out of chronological order. Particularly surprising, even to Levy himself, was that despite a lack of planning, the story still followed a coherent and logical sequence similar to anything that would have been planned. Perhaps this phenomena can be explained by Levy’s ingrained training, cemented by years of experience, forcing even his natural thoughts to flow in a sensible order. Or perhaps, planning itself quickly becomes a superego sport that seeks to repress our true intention. As an art form that requires so many steps over a course of time and often so many different partners, it would be difficult not to involve planning at all in animation. But Levy’s short reminds us that sometimes the act of doing is what helps us arrive at our conclusions and that if we just let go and stop imposing what we think we know on ourselves, the results can be refreshing.

It was the third time I’ve seen Ru Kuwahata’s and Max Porter’s “Something Left, Something Taken,” but I was nonetheless still entertained. The 10 minute and 15 second film quenches my thirst for three things: 1) crime drama 2) animation and 3) mixed media. A stunning mash up of stop motion, 2D elements, and digital compositing, “Something Left, Something Taken” is a cleverly written, well thought out and evenly paced tale of a couple’s imagination going wild as they are picked up from the airport by a suspicious looking character. Having flown out to attend a lecture on and reading plenty about the “Zodiac Killer” the character of Max is the first to be very skeptical about accepting the ride. It isn’t until a mysterious, gun-shaped bag falls into Ru’s lap that she considers Max’s suspicions and also grows weary. The two then follow the tips in the book Max brought along with him to assure that they leave clues behind for the detectives that will investigate their inevitable homicide. In the end, they find that were just being paranoid, and their weird chauffeur was just a hippie with a fishing rod.

Rob and I introduced ourselves to the cute and talented couple at the after-party. As our usual socially awkward selves, the only thing we managed to say was “we’re kind of like you, except, we probably watch more t.v.” Max explained that he handles a lot of the post production work while Ru handles more of the pre production work. Ru went on to tell me that while some of the projects they get under the handle of Tiny Inventions are handled more by one of them than the other, that ultimately, they work on everything together because their skills compliment each other. It’s a beautiful union and I look forward to what they deliver to the world next!

Andy Kennedy’s “Accumulonimbus” screened next. The artist was unfortunately not in attendance and as it was an abstract piece with a name that Signe Baumane joked she “couldn’t pronounce,” it’s hard to tell what I saw. Drawing on words that linger in my brain from elementary school science class, I think it has something to do with clouds. The entire piece was displayed from within the center of a circle while everything else around that circle was black. At some point there was stop motion clothing spinning as though in a washing machine which made me consider that this piece was a symbolic representation of cycles? I don’t really know. Either way, the claymation was beautiful, the timing flawless, and the movement mesmerizing.

Following Kennedy’s piece was another abstract short called “Little Deaths” by Ruth Lingford. I’d known of the French phrase “la petite mort” and what it often meant, and Baumane’s opening presentation prepared us slightly for it, but nothing could really compare other than by seeking out this film and watching it. Lingford recorded a lecture at Harvard on what an orgasm felt and looked like. Among the voices was our own Signe Baumane! Lingford went on to animate what these experiences felt and looked like. It was handled with great sophistication and amazing accuracy! The image that remains in my head is that of a contour lined nude female body in profile that wrinkles up in small spurts like an auditory wave form. Another stand out depiction for me was the female form shaded with such expert handling of tonality, as if to suggest that that the form came to be by accident. After the screening of the short ended, there was a sense in the air of excitement mixed with just a slight healthy dose of discomfort.
Riled up by Lingford’s film and almost wanting to grab Rob and run out of there, my attention was grabbed with the steel grip of Pat Smith’s fluid and dark style of animation. Smith explained that when he set off to create “Masks” he went through a great deal of frustration and revisions. At first, he recorded several strangers discussing what “wearing masks” meant to them with the intention of animating to the voice overs. Smith’s fears that this endeavor was starting to become cliched and uninspiring was confirmed by Karl von Kries who had worked on the audio for Smith’s earlier film “Drink.”

Listening to von Kries tough, but honest advice led Smith to a revelation. Smith described the visuals he wanted to develop and asked von Kries to create related music. The result: an almost disturbing mix between industrial and jungle drum and bass. From there Smith was able to animate with more clarity, bouncing off the auditory cues and being inspired by the odd but mysteriously enchanting tune.  As noted by several members of the audience, Smith’s fine art style comes across most clearly in this film. Weaved through out the short was a demonstration of Smith’s unique talent for creating truly evolving shapes that interact and envelope each other.

Shining a humorous and personal light on depression, excerpts from Signe Baumane’s “Rocks in my Pockets” was the second to last screening of the night. As with many of her shorts, Baumane’s process for the film involves animating in 2D over paper machier backgrounds. In the short, Baumane discusses her grandmother’s failed attempt to drown herself and in a morbidly funny way describes what she would have done to assure success if she were to kill herself. Baumane goes on to discuss what it was like to grow up in a repressed climate. She talks about seeing a therapist much to her parent’s chagrin. A very personal account of her own experiences, Baumane demonstrates fine craftsmanship, story-telling and extreme bravery all while remaining sincere and genuine.

Above all the seemingly effortless humor that exudes from Baumane makes her absolutely attractive and difficult to turn your attention away from. She joked that since fund raising hasn’t helped her much for the development of this film, she had considered prostitution but felt that no one wanted her. When one male audience member expressed his surprise, she asked if he’d like to arrange something. It is this pure, unforced, natural ability to twist uncomfortable taboos into ordinary conversation, that makes Baumane a stand out story teller of our time. I think I speak for everyone when I say, I cannot wait to see “Rocks in my Pockets” completed.

The last screening of the night was a new short by Bill Plympton, but it was a surprise and a secret, so my lips are sealed. Overall it was a wonderful screening and the people at Kodak including DeWitt Davis, Anne Hubbell and Susan Selig all did a terrific job of putting the show together. The room was so packed, some people (including me) had to stand, and though my knee problems concerned me at first, the short length and fun content of the films immersed me so that by the time it was over, I’d forgotten I was standing. The night was topped off with drinking at a local bar. Afterward, I ended up eating buffalo wings at some place that I don’t remember, but, I do remember that it was delicious!