Flying the Flag at Se-Ma-For

Posted by Richard on Sep 13, 2010 in Feature Articles | No Comments

Flying the Flag at Se-Ma-For: Guest Article by Tom Gasek 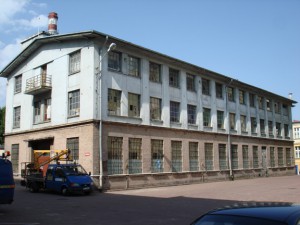 Since I have been teaching at the Rochester Institute of Technology in the last 5 years I have been having wonderful working summer “vacations.” After 27 years of professional activity in the area of character stop motion work (including stints with Nick Park, Peter Lord, Will Vinton, Art Clokey and Henry Selick) I found it hard to just drop out of the animation field. My “free” summers have offered me an opportunity to stay active and discover new projects and opportunities.

About two years ago I hosted, through RIT, a Slovenian stop motion animator by the name of Kolja Saksida. Kolja had applied for a special grant to come and stay at a non-profit institution in the US that was in involved in stop motion animation. RIT is where he landed, and since I teach stop motion there I became Kolja’s host. It was a wonderful opportunity for our students and for Kolja. A year later, after Kolja returned home, he and I planned a trip to Ljubljana, Slovenia to see Kolja’s studio and to tour around Prague and Lodz Poland visiting other animators and studios. Se-ma-for in Lodz, (pronounced “wood-ch”) Poland was going to be a highlight. They had just produced an Academy Award-winning stop-motion film called “Peter and the Wolf” in cooperation with Breakthru films of London under the direction of Suzie Templeton.

The trip never came to fruition because some grant monies were not awarded but I did continue to stay in touch with Adam Ptak of Se-ma-for in Lodz over the next year. Adam was reinvesting in Se-ma-for and together with the assistant Ewa Wierzbowska had applied for some Polish and European funds to train new animators. I suggested an animation workshop and we aimed at making that a reality over the following year. We finally set a date for this past June 2010 for me to come to Lodz to teach this workshop. I recommended a British friend and fellow artist/animator, Miki Cash, to teach a follow up workshop and I notified my friend Kolja Saksida, who was in Berlin on a grant, that I would be in Lodz. I worked with Miki on several Aardman Animation projects and had hired him to work with me in the States on commercial projects. Miki is now partners in Wonky Films in Bristol England. Both Miki and Kolja came to Lodz during my tenure there. 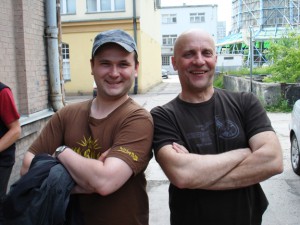 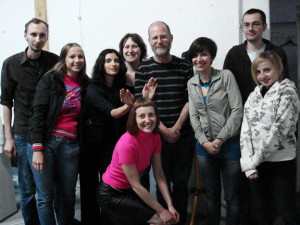 Tom Gasek and some of the Se-ma-for students

My charge was to present an animation workshop over 7 or 8 days to 15 new animators that Se-ma-for had screened ahead of time. My concern was that I didn’t know any Polish and I had never been to Poland before and I made this quite clear to Adam. He didn’t seem to be concerned with these issues so I proceeded ahead. When I arrived in Warsaw in early June I was greeted by two young employees of the studio, Anna Mroczek and Wojciech Leszczynski . Their English was excellent as we conversed on our way to Lodz, which was about 100 miles west of Warsaw. Lodz is the film center of Poland and has been the home to the, once government run, studios of Se-ma-for since 1947. Lodz is also the home of the Polish National Film, Television and Theater School and has hosted many of Poland’s most famous filmmakers like Roman Polanski and Zbigniew Rybczynski, who created the 1983 Academy Award winning “Tango”(also with Se-ma-for, the old one), an animated film about the roles and habits of different people in one room.

In 1999 the government decided to liquidate the Se-ma-for studios and some former employees including Zbigniew Zmudzki bought the name (Se-ma-for) and started to slowly rebuild the studio and its reputation under the “free-market flag.” The studio became the home base for many of Poland’s new young animation directors including Marek Skrobecki, Piotr Dumala (he cooperated with the old Se-ma-for) and the vivacious Balbina Bruszewska, who I met during my visit. The studio is located in one of Lodz’s deserted factory complexes that is slowly being revitalized. Lodz was one of the largest textile manufacturing cities in Europe during the nineteenth and early twentieth century and this history can be seen throughout the city. The infrastructure of one of these electric and textile factories is quite large and is currently housing several small companies including Se-ma-for. The potential for growth is so fantastic that the American director, David Lynch has been interested in taking over one of these factories to house studios and other small businesses. This is still in negotiations.

Upon my arrival at the studio it was quite apparent it was mostly comprised of people under the age of thirty, and they are a very tight, self-supporting community. They all spoke or understood English. I did meet Mr. Zmudzki but spent most of my time with Adam Ptak, Emil Kumor and many of the other young members of the studio. Emil was my DP and helped me set up my workshop in the basement of the large building that housed Se-ma-for. They had the best equipment (i.e. Canon 5-D cameras, Dragon software and a green screen stage) but much of the building was in various states of restoration. The time and money that Se-ma-for invested was directed toward the young and new talent that they wanted to promote and the community that the studio was nurturing. Training new animators in stop motion is an investment in their future that will pay off very well. The program consisted of 3 to 4 months of hands-on practice in stop motion for these new recruits peppered with week long workshops given by their own master animator, Krzysztof Brzozowski, British animator, Miki Cash, Mexican animator, Jonathan Ostos Yaber and myself. The studio is about to land a new animated television series for kids called “Parauszek” (Flapper the Hare) which will use this new talent and then they have a plan to move into a feature film based around the early life of Chopin directed by Balbina Bruszewska. The British company, BreakThru Films, was across town producing their own feature about the life of Chopin with a European crew and many of the talented set and puppet builders from Se-ma-for, who they worked with on Peter and the Wolf.

I was so impressed with the spirit and drive of the new Se-ma-for studios. Their vision and dedication puts them on track as a “rising star studio.” Their talent and deep history in stop motion, in particular, give them the right foundation to build on. The early work of Se-ma-for directors like Tadeusz Wilkosz, Edward Sturlis and Zenon Wasilewski are so charming and full of great design and storytelling. These are films and directors that many of us don’t know in the West but I feel will become a part of animation history as the doors to Polish animation open wider. Many of these films have an elegant simplicity in their design that fits stop motion quite well. The newer Polish stop motion tends to lean into a realism or naturalism that draws less on their past than referring to more modern Western stop motion. The range is quite broad and their foundation quite solid. The creative drive is vibrant and the community and human element very grounded. I will never forget the day I spent with Anna Mroczek and Justyna Rucinska from Se-ma-for touring Lodz from the puppet museum at the Museum of Cinematography to the old factories in Lodz to many long conversations about our small world of stop motion animation. The love and pride for their history and the hope for a successful future was beaming in their conversation. They spoke about their recent collaboration with the Brothers Quay on their new film, “The Mask,” (“Maska”) their retrospective show on the Polish master animator and entomologist, Ladislav Starevich (Wladyslaw Starewicz) from the early twentieth century, and about life in Lodz from the high street called Piotrkowska Street to the deserted factories around the city. The people at Se-ma-for were wonderful hosts willing to share their “vitamin V” (V is for Vodka) and their open ideas of what was possible in the future with the new Se-ma-for studios. This is a studio well worth watching.

Tom Gasek is an award winning stop-motion director and character animator with over 27 years of professional experience. His credits include animation on Aardman Animation’s “The Wrong Trousers” and “Chicken Run” to Henry Selick’s “Coraline.” Gasek has been involved in numerous projects from features and broadcast work to scores of commercials, many of which he has directed & produced through his own studio. Tom has conducted workshops in various universities around the Northeast including R.I.S.D., Harvard and The School of Visual Arts in New York. One of Gaseks’ commercials for Nickelodeon featuring “The Inside-Out Boy” is a part of the permanent collection at The Museum of Modern Art in New York. He earned a BFA degree in Design at RIT and his MFA at the Art Institute of Boston at Lesley University in Studio Arts in 2006. His short films have been included in The New York International Children’s Film Festival, The Chicago International Film Festival , SXSW and the Ottawa Animation Festival. He currently teaches Stop-Motion Character and Experimental Animation, Acting for Animation, Animation Pre-Production and the Business of Animation at The Rochester Institute of Technology. He has just completed his new independent animated short called “Off-Line.”