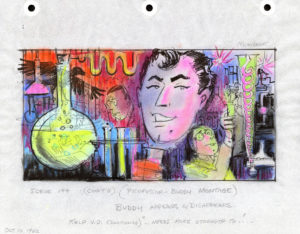 Few stars from the golden age of the Hollywood studio system valued looking—and being looked at—more than Jerry Lewis (1926–2017) did. Having amassed years of stage experience before he emerged as a major film actor and director, he made acknowledging his audience an essential aspect of the “comedy of looks” that characterized his work. And in no other Lewis film is the experience of being seen so central as in The Nutty Professor (1963), in which he treats his audience as a main character. In this adaptation of the Dr. Jekyll and Mr. Hyde story, his dual performance as the self-effacing Professor Kelp and the narcissistic Buddy Love represents different sides of the Lewis persona, and the onscreen student and nightclub audiences who witness his behavior represent the gaze of the moviegoing public.

A recent gift to the Museum, John Lauris Jensen’s storyboards for The Nutty Professor are graphic interpretations of the script, suggesting elements of performance, staging, lighting effects, camera placement, and cutting continuity. The 11 storyboard sequences on display here anticipate the look and experience of the motion picture, skilfully expressing Lewis’s intentions as both director and performer.