Posted by Tristian on May 11, 2014 in Feature Articles | No Comments

On the last day of April, Brooklyn had a desperate last minute shower, getting ready for whatever hipster flowers might bloom in May.  Left-turning SUVs scattered light over sheets of water and uneven asphalt in front of Legion bar, the last outpost before the edge of ‘East Williamsburg.’  Obscured by rain and norm-core style, the bar was difficult to make out, and many people questioned the legitimacy of their destination.  But they all came for Twillerama. 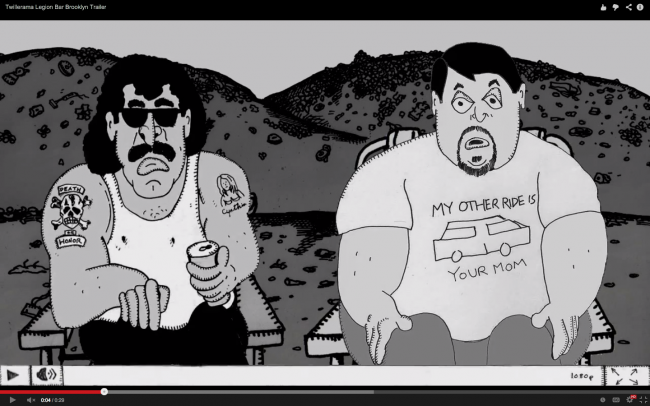 Randy and Jeff telling us how it is.

Twillerama was a curated show by Morgan Miller.  At a fictional level, the show was hosted by Jeff Twiller and Randy J Johnson, via live webstream (in 1080i!) from a floating garbage dump (probably in New Jersey).  In reality there were more than 40 people packed into the back room of the bar (where bands play) to see the show projected on a screen.  A couple of us tried to take out some extra folding chairs, but those turned out to be repositories for rainwater leaking from the roof, and only the brave ended up with the chairs.  Others crowded on radiators and speakers, and more stood in the back.  Despite the rain, more than 90 people had RSVPed on Facebook, so it was pretty much Animator City.

Jeff and Randy introduced each short film and animator, and in-between handed out some awards: best picture, writing, titties, sound design, etc.  Jeff is actually pretty well versed in various notable short films, while Randy seems more to hang on to the subject of the animations.  Randy was frequently confusing the animators (many of whom were in attendance) with ‘other assholes.’  The first film was Marianne, by Richard O’Connor, who is NOT an asshole building contractor, but in fact a talented alumni of The New School.  (This film is exactly the kind of story I like to animate…intellectual and to the point, without further explanation. Perhaps I should read more Bertol Brecht)  Almost every animator got an introduction that wasn’t only humorous, but also imparted a warm and friendly feeling from the curator Morgan.  For example, after Dad Teaches Me How to Shave by Simone and Danny Dresden, Jeff wheezes that the film was really about ‘feeling naked and exposed when it comes to the realization that you have to grow up,’ and not about pedophiles and incest as Randy suggests (in his defense, Randy was probably coked up *bump*).

[Note Bene: When it comes to donations, you take the ‘hat,’ drop some money in it, and pass it to your friend and judge them silently until they donate.  I’m not going to stand there and hold the hat for you.  Let the Mamas and the Papas explain it to you].

When it comes to women, Jeff and Randy actually seem to have some game… Randy might be hairy, drunk, and belligerent when it comes to films like Boobatary (Leah Shore), but in a dark way he actually has respect for the points-of-view that arise in all of the films by female animators.  Jeff described Celia Bullwinkel’s film Sidewalk as about woMAN and FEMINISM, and EQUAL RIGHTS, or something like that because by the end of the list I thought he was gonna pass out from exhaustion (Jeff could stand to loose some weight).  After Sidewalk ended, Randy applauded the realism of the film, and said he respected the problems of chick’s bodies, because ‘those fat girls work harder to get it.’

Halfway through the show was a thoughtful intermission, that gave people a chance to stretch out and refill their cups.  The program was not made up entirely of modern and well known films; I discovered The Club (1975, dir. George Griffin), which was a colored pencil drawn cutout animation about the exclusive and boring lives of a bunch of dicks.  I had texted my non-animator friends to come see a show that would be both sexy and eccentric, and Twillerama did not fail me.  The NSFW programs maintained a healthy balance between objectifying men and women (or just humanity in general).  And several shorts were creepy enough to spoil the eroticism of almost everyone’s mood.  Hey Rachel (Sylvia Liken) was a B&W hand drawn short with a couple graphic splashes of blood, and I’m going to refuse to believe it was based on real found audio, because, gross.

Mountain Ash was pretty interesting just in how it was created.  Produced by Late Night Work Club, as part of a larger film-set Ghost Stories, I was told by some audience members that the 15 or so animators coordinated online and never met in person until the premiere of the film.  Their website describes their productive as being very dedicated to their craft and animating while you’re out getting drunk.  Mountain Ash has a small set of distinct characters, and the narrative is repetitive in its structure. 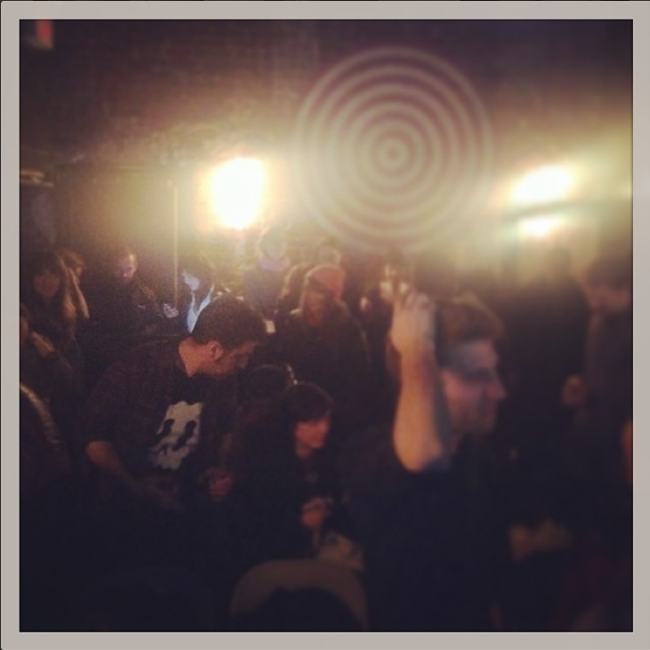 Overall, I found that the show had a hearty sense of community, and the hosts’ commentary reminded me of Signe Baumane’s screenings where she grills the animator after showing their films.  So perhaps it was not such a surprise that Randy and Jeff declared Signe’s film Kirby the winner of the evening.  (Your prize is in the mail!)  After the last film ended, many animators and friends stayed to catch up on old times (besides, the rain was still pouring).  One of the Twins-Are-Weird had valiantly made the trek to Brooklyn, and was impressed by the whole evening and PERHAPS inspired to put together another Dumb-Shit-Show festival of their own.  I chatted to some people I recognized from our own ASIFA-open-screening, to see how their films were progressing.  But one of the nice aspects of the evening was getting a small chance to talk to some animators who don’t really come to ASIFA events to hang out.  I frequently rely on ASIFA to have a social life, but it’s important to circulate.  Asking people about their work is always a great opener, and you never know if you might wind up with a new friend, job, date, or frenemy.

Twillerama was a great example of what Brooklyn culture can be.  I think my coke-n-rum could have been stronger.  Let’s drink to more people putting on animation shows!

Special Guest Star Todd Hanson (The Onion, Squidbillies, The People vs. George Lucas) appearing as the voice of Todd Hanson.