Posted by Tristian on Aug 5, 2015 in Feature Articles, Uncategorized | No Comments

Tess Barker: That’s a popular thing with booze, you just gotta do a one to one ratio… Welcome to the secret to your life.

Barbara Gray: What do you mean one to one?

Barbara: I thought you meant, drink a cup of coffee, drink a booze, drink coffee-

Tess: As long as you alternate water,

Barbara: I definitely don’t do this water thing.

Brandie: If you were to do that, coffee water booze, like what, what would happen to you?

Barbara: Well how do I feel, I had a very strong mimosa this morning and a strong coffee.

Tess: How do you feel?

Tess: It’s great, isn’t it?  I had the same thing.  I had 2 cups of coffee and 2 beers this morning, and I’m feeling fantastic.

Brandie: And then two glasses of water…

– An excerpt from the podcast Lady to Lady 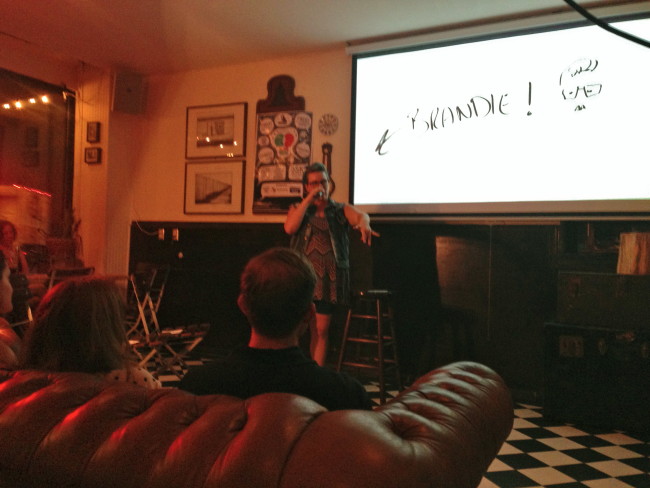 Brandie Posey opens up the show!

Thank you ladies!  I was so excited to hear that Brandie Posey, who I know from the great podcast Lady to Lady, was hosting Picture This! at Die Stammkneipe Beerhall as part of Animation Block Party for free on Friday July 31st.  Brandie is an L.A. comedian (originally from Maryland) and on Lady to Lady they “welcome a fourth funny lady to the table each week to bring you gut-busting debates over current events and pop culture, along with a healthy dose of embarrassingly hilarious personal revelations.”  I just wanted to share one of my favorite bits about proper hydration with my animation audience. 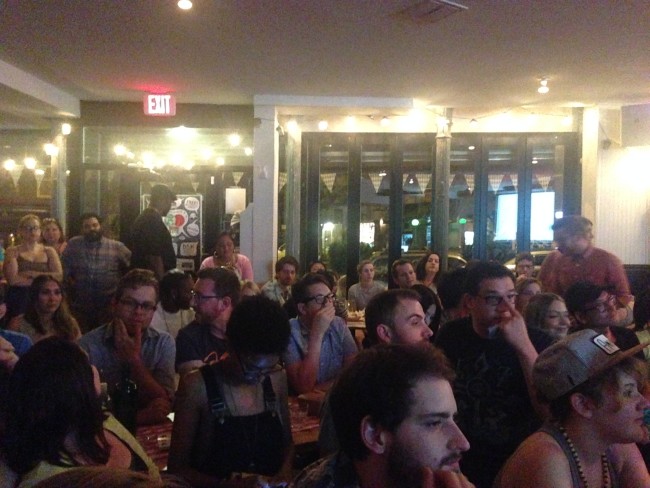 My friend Andrew and I grabbed a specialty beer, or tried too, because they ran out of Grevensteiner Zwickl almost immediately, and we drained the tap of the next nutty floral brew on the list.  There was only hefeweizen for us there on out.  Many people had picnic tables to sit in, and claimed all the remaining barstools to get close to the action.  Which was great since apparently last time the venue was too large and there was too much space between the somewhat introverted animators and the extroverted comedians, so it lacked a certain sense of community.  But not this time!

Emo Snoopy is mad because no one will play hackey-sack with him at… a Phish concert?

The animators had a graphics tablet hooked up to a laptop with Adobe CS6, connected to a projector.  The pull down screen was located behind the comedians, and the animator was located upstage right of the stand up comic.  Most of the gags are rendered in standard paintbrush, with some scaling and dragging for emphasis.  Some people could improvise computer techniques more than others, based on experience with the situation.  Techniques included simple copy-pastes, with more ambitious use of multiple layers, or colors.  There were lots of dick jokes, and pussy jokes (for the ladies).  You can learn a lot about a person based on their dirty drawings.  [Some comic called out that ‘Nickelodeon draws the best dicks!’  J/K ]  To be fair, the stand up was pretty dirty, and the animators mainly started off illustrating what scenarios and one liners they heard.  But they also elaborated, or reinterpreted the jokes, and added their own ironic images or snarky captions. 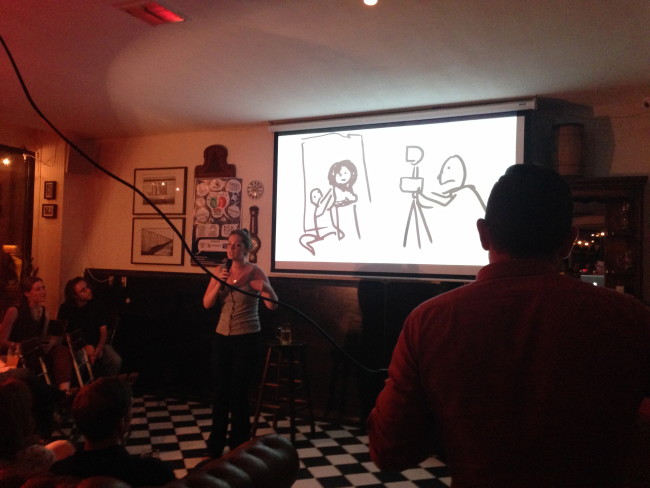 There was a delayed reaction of a second or two from the digital projector, which added a certain unique strained-yet-creative element to how the comics and animators played off each other.  So it wasn’t exactly like over one-hundred years ago when they would have an artist entertain the crowd with a chalkboard during a vaudeville show.  The best parts usually included the comic turning around and seeing their own jokes flower before their eyes.  “This is a like a puzzle my mind doesn’t get yet,” said one of the female comics, as an animator drew a body part that turned into an entire face.  “Thank you for drawing me thinner than I really am.” 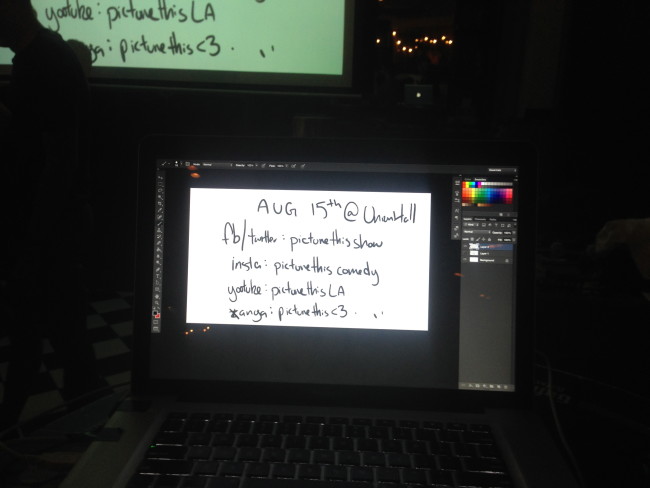 As with all great ideas, there were some technical issues, and the software had to be rebooted mid joke.  But the comics were professional about it, and said to the animator: “I can take rejection from the audience but you… we had a bond earlier!”  I will say that it seems that men were mostly paired with men, and women with women, aside from Brandie’s initial set.  But that gender dynamic totally works, especially if you have five minutes on how we can get to the moon, but all we have for tampons are pieces of cotton. 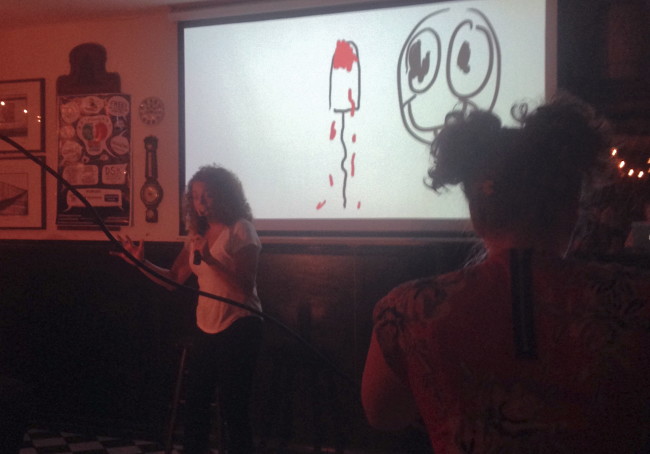 Michelle Wolf and Leah Shore send tampons to the moon!

One of the best sets included [update: comic Danny Tamberelli and animator Edmond Hawkins] who was able to call back his drawings as the comic called back their jokes (a ‘call back’ is a fancy Hollywood term for referring to a joke you made earlier, as I learned from the Maximum Fun podcast network).  They could almost instantly switch back and forth between two different German penises.  When a lady comic was paired with a man (it was Nelson Diaz!) there was almost too much chemistry.  “No no,” she said as Nelson was drawing, “I saw your wedding ring.  It was the first thing I saw.”

It’s animators all the way down, with Nelson Diaz (who is married).

Picture This! is BACK at the illustrious Union Hall in Park Slope, SATURDAY 8/15 7:30pm 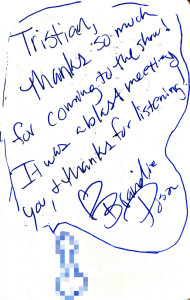 I finally got Brandie’s autograph, after a snowstorm destroyed the N-Train I was taking to her previous show in the winter.

Check out these clips for some great memories, and Find out how Michael met his wife Heidi, and stay tuned for the full length video coming soon!