Posted by Tristian on Nov 14, 2014 in Feature Articles | No Comments
If you are a modern woman in the United States of America, you probably are being paid a salary that is 33% less than a man doing the same job.  If you have gotten pregnant, and you have decided you cannot or do not want to be a mother, you would have to figure out what state regulations are currently in play.  If you are a female actress or journalist, you may have discovered that expressing your opinion on video games will put you at risk for being hacked and/or having your life threatened.
~~~~~~~~~
After the 2014 midterm elections, there are now a record setting 100 women serving as Senators or Representatives in the outgoing Congress.  In total, our government has 100 Senators and 435 Representatives.
~~~~~~~~~

On Thursday, November 6th, a team of people led by Susan Godfrey held the first annual “Ladies Animated Shorts Screening, (LASS)” at the Productive Studios, a full service animation studio composed of freelance animation professionals.  Out of the ten animators featured on the Productive website, 7 of them are women.  2 of those women are on the board of ASIFA-East (and to be fair, one of the men is as well!)  And for those who are personally familiar with Susan as a human individual, her accomplishments are inspiring. 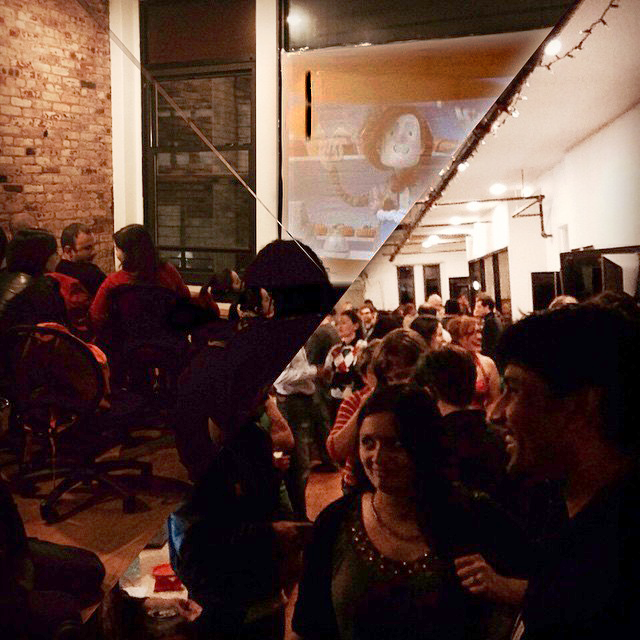 Susan also knows how to PAAAAARRRRRR-TAAAAAY!  Pineapple infused tequila, strawberry vodkas, she has some hook-up that is very classy, as I’m sure I’ve mentioned in earlier articles.  This time I dressed myself for the crowd, which is likely to raise the room temperature a little high, but that’s only a testament to how well attended the night was, which I will hazard a guess at 50.   I’m not sure when doors opened, but the invite said 8pm, and I knew there would be time set aside for socializing before the show, which would probably be around 9pm.  After all, there are plenty of people still working during the day at their desks.  (Sadly, as it was a Thursday, we had to cancel life-drawing class, but imagine how much more ridiculous it would have been to throw some naked models into the mix?  Heyo!)

The LASS program included 14 different films, all made by women.  They were educated in Missouri, New York, Philadelphia, Latvia, and more.  All of the films are fairly recent (2013/14) and there were several premieres.  They were not selected because they address ‘lady problems.’  The “joke,” about men submitting films turned out to be true: guys really were allowed to submit, but only if they wore a dress to the screening.  No one did either, unfortunately, although I probably could have convinced myself to do so (agh! I don’t even know where I would buy a little black dress!  Zara?)  The idea is to have men stand in the shoes of someone else, even if it smacks of general hazing, and rebellion against a patriarchal society.  The dress represents the barriers women routinely face in entering the workplace.  I attended an animation party in Williamsburg for Halloween, and some animator did dress ‘in drag.’  Men might suck it up for the wild revelry of Hallow’s eve, but it would be truly remarkable to see what future LASS shows might do to the 9+ old men of the industry.

Here are some highlights: 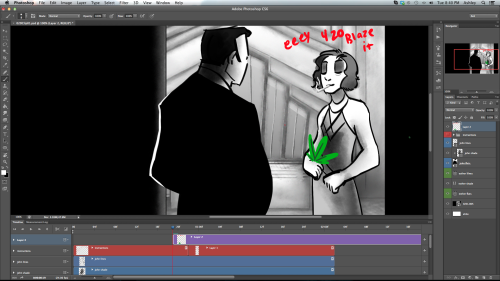 While it looks like some of Meredith’s colorists are having fun behind the scenes (check out the link for her cool production tumblr) Skeleton Key is actually a gritty noir.  Half romance, half clockwork, this animation is a treat to the eye with great black and white lighting, and to the mind with thick sexy characters.  Reminiscent of Maltese Falcon and Metropolis, I think I know what happens in the love triangle, but the key eludes me still. 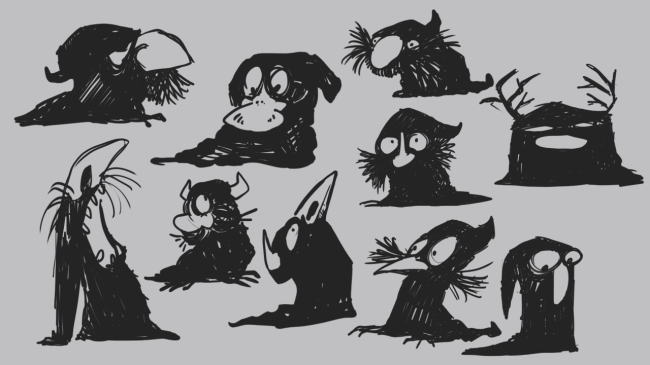 Yule Lads – Shannon Connor (University of the Arts in Philadelphia)

It may seem unusual, but here is a spooky Christmas tale!  Based off an Icelandic legend, a witch sends out her familiar cat and her mysterious minions to simultaneously terrorize and reward a sleepy human village.  Shannon Connor developed the little black creatures from dwarves into more dynamic blocks that flip, flop, slide jump and rappel over windowsills (and into your hearts!)  Graciously there is no dialogue. 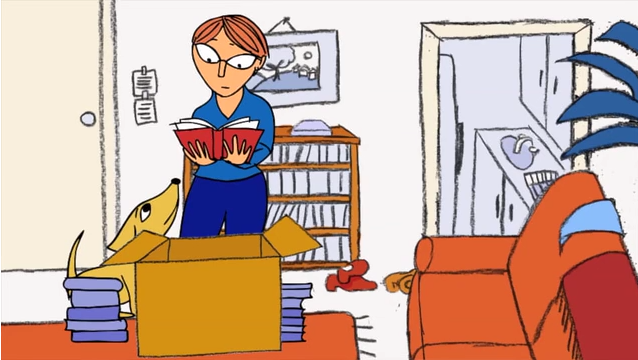 I was impressed by the staging of the characters in this film.  A woman finds the diary of her younger self, and visits her in her memories.  Having the young girl slip out of the woman’s grasp or walk out on her adds a comedic touch that reads visually even if the audio gets lost.  I don’t know how I feel about this woman being so surprised at her own diary though. 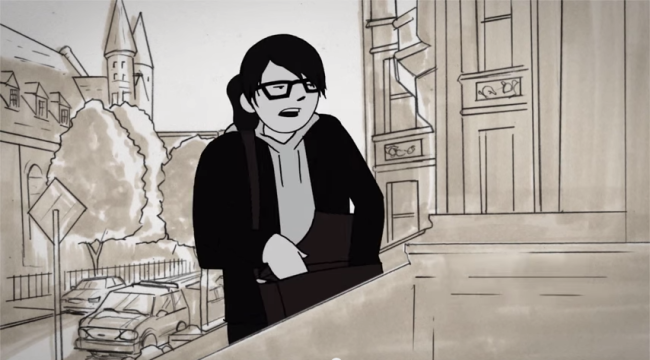 A short short by one of the talented ladies at the studio, Late illustrates the problems we all face when leaving the house.  Well, this girl has it harder than most, as shown in her great set up and delivery.  We aren’t saying it’s Christi, but we’re not saying its not Christi, capiche?

Here are the rest of the films that screened:

First World Female Problems – Katie Cropper [this animator also is featured at the Productive Studios and is an ASIFA-East board member; her film addresses some of the kitschier problem of advertising targeting women]

Crayon Dance – Gina Bari [this film includes a special thank you to the Apple Store, and allegedly was shot entirely on an iPad]

Something Has Happened – Kara Sankus [a trippy film about being anxious]

My Kingdom – Debby Solomon [a crowd favorite, with another ASIFA-Member singing raunchy tunes about her personal space]

Beardo – Chrissy Fellmeth [a crazy late night stoner/hipster comedy, featuring a staff of many ASIFA-East members and quite a few personal friends, it shows off a lot of silly gross out humor in the adventures of a resuscitated Canadian Ice man and his bear friend.  Chrissy was seen sporting a bleeding heart latex jean jacket, custom made, and was a remarkably good audience member] 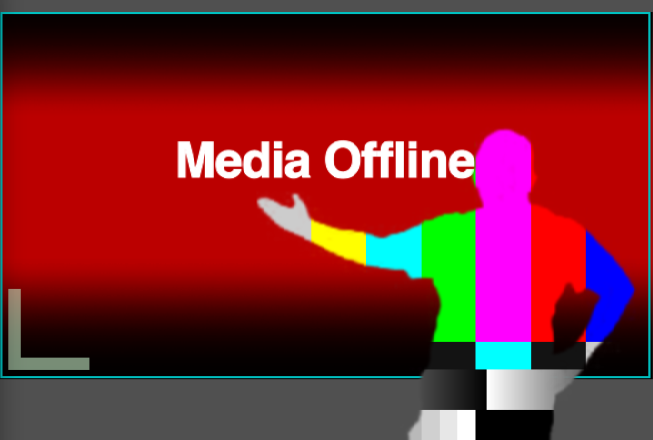 Now for my final comments:

It is true that there were several technical problems that delayed the screening by about half an hour.  The small seating area fit only half the audience, and the rest were forced to stand in a narrow hallway with no view.  And the audio was too low, the computers froze, the projector jiggled, etc etc etc.

None of these events is an excuse to be an boorish hipster.

Let’s compare to the French Animation screening at the School of Visual Arts the day before: a minute into one of the films, the screen cut out.  As it generally happens, there was some nervous laughter, a few unfunny jokes, before the audience settled into their cellphones or chatted with their neighbors.  We all made it through, sitting in the dark in an actual movie theatre.  If it had been a public movie cinema, with tickets, we would have had the right to ask for our money back.

The Productive is not a professional theatre.  LASS was a groundbreaking new show, and it had some bad luck.  It is very plausible to assume that 90% of the audience was made up of personal friends of the animators in the show.  You should be supportive of the artist you know, and not make it any worse for them.  Everyone could tell ahead of time that it was going to be a challenge to get seating.  Several people tried to ask the crowd to sit on the floor, which was futile because they couldn’t even see that there was no room for that, and impossible for others because they were wearing nice skirts.

Sometimes you have to let it go.  I was told the management gave out some free drinks to make up for the delay.  But we should be happy there was even a $5 cocktail bar in the first place.  AND that the admission was free!  AND that nobody called the cops on the strange smells from the bathroom.

Women in animation face enough problems.  Patricia Burgess (LASS organizer, ASIFA-East board member, Beardo producer) made a brave speech to the crowd, apologizing for the delay, and thanking everyone who made the event happen.  She said the event was two years in the making!  Organizing animation screenings is difficult, as I found out personally during the Polish School of Animation.  My first tech-rehearsal was a complete failure, and a waste of time as I tried to tear down firewalls.

The one time I decided to engage in the audience reaction I did so thoughtlessly.  I dismissed someones complaint as a “bitchy comment.”  I immediately felt shame; calling a woman a bitch for complaining is precisely one of the problems that the Ladies Animated Short Screening was created to address.  I’m sorry, whoever you were.

So we learn and we move on.  The screening was remarkably well attended to begin with.  We got to see great new films, thanks in large part to Elliot Cowan (master lecturer at UArts) who encouraged young animators to submit.  Provided that the management puts a little bit more elbow grease into the next run, I look forward to seeing more films from the feminine perspective.