Girl and the Seal

Posted by Tristian on Jan 29, 2015 in Feature Articles, Industry Events | No Comments

Tonight the kids are watching Tomm

As he draws about the sea

Yeah he draws for you and me.”

On Saturday, December 20th, at the IFC Center in New York City, Tomm Moore attended a screening of the latest film he directed: Song of the Sea.  This movie has been nominated for this year’s feature-animation Oscar and is distributed by GKIDS.  It was produced by the Irish animation studio Cartoon Saloon which also created Secret of Kells (2009). 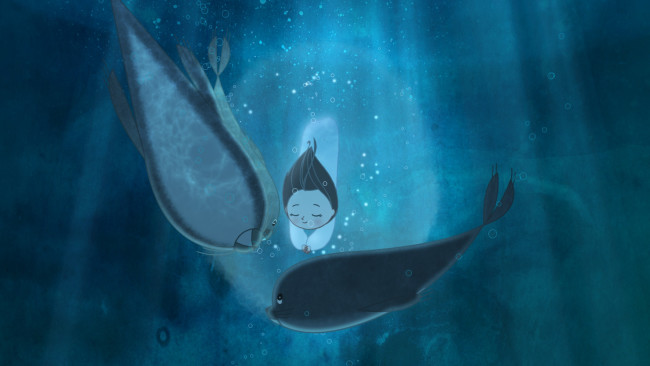 Song of the Sea is a modern reinvention of the Irish folk lore of selkies, who are creatures that live as seals in the sea, but can shed their skin as a fur coat and live as humans (usually females) on the land.  It is essentially the story of Ben, a young boy coming to grips with his newly widowed father, and his mysterious little sister Saoirse (“Sair-she”).  His mother has disappeared several years ago, and magic is starting to creep into his life.  Tomm Moore was inspired by the book People of the Sea by David Thomson, which covers many Celtic tales, myths, and legends.  Some aspects of the characters Ben meets on his journey come from the traditional fairy-tales, while others are tweaked or re-imagined for the movie.  The witch Macha was a very different woman before the filmmakers hit upon the idea of owls in her design.  Tomm Moore considers animation to be an “iterative process,” a process that is built up bit by bit, with layers of storyboards that form the sediment of the script.  It takes a long time.  However, the two main children, Ben and Saoirse ended up looking almost exactly like how Tomm imagined them.  Ben is quite close to Tomm’s heart, and he added personal childhood influences to the character, such as an obsession with early 3D red-n-blue glasses.

Song of the Sea is a prime example of magical realism, with real parts of Ireland showing up in the film.  There are real sea towns, with painted backgrounds based on research trips to the coast where ‘everything was too cute, and nothing was left to invent.’  The bar where Ben’s father goes to mourn his wife is based off a real bar in Kilkenny down the street from the animation studio.  The holy well that the children pass is a real place as WELL; it’s a special location meant to demonstrate the complicated history of Ireland, and how the people layer Holy Mary icons over more ancient pagan goddess worship.  Several of the songs in the movie are based off of traditional Irish songs, while others were original compositions.  Dúlamán is one of the traditional songs, in which the best seaweed of all Ireland courts a lovely lass.  The title track is an original composition by Lisa Hannigan.  And the song that the grandmother first listens to in her home is by the John McCormack (SPOILER: and appears later in the witch’s hut played backwards!!!)

This movie is pretty similar in style to Secret of Kells, but I did notice a few new advances.  Particularly in the scene where Ben meets (the un-Google-able) King-Fairy-with-Super-Long-Hair.  Here the animation turns away from the typical highly stylized and geometric, and zips and stretches into the Tex Avery.  Tomm himself animated most of that scene.  While Tomm says that Disney’s The Jungle Book served as an entertainment inspiration for the film, he seemed more passionate telling us the story of his own youth, when he attended a fun party.  Someone had put on The Secret of N.I.M.H. to entertain the younger children, but Tomm and never seen it and was entranced.  Sure his friends made fun of him for sitting with the little kids, but the movie made Tomm realize that he loved animation.  And when he discovered Don Bluth, he realized he could earn a living.

Tomm elaborated on the animation production, even though he seemed resistant to discuss it.  This feature was made (almost) entirely on Cintiqs and in TVPaint after he saw how quickly they made things, but still incorporated hand drawn animation (stylus on a screen) and backgrounds made on paper.  It is 12 frames per second, on 2s but sometimes stretching to 4s.  He seemed reluctant to dispel the mystery of animation.  Sometimes fairy lights are just fairy lights, Tomm said.  An explanation would ruin it, he said; “just look at midichlorians.” 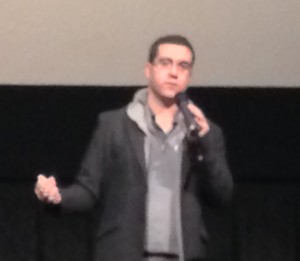 Tomm Moore discussing his latest film “Song of the Sea.”

Song of the Sea ends it’s run at IFC today, Jan 29th, but is sure to come to a DVD near you.  In the meantime, ASIFA members can enjoy GKID’s partner festival this March, the New York International Children’s Film Festival, which usually premiers many interesting foreign kids animation movies.  (Members will receive discount codes for ticket soon, on sale now).  You can definitely pick up some old and new DVDs from GKIDS there.  Plus, if you want to ditch the kiddies, you can attend the Not-For-Kids benefit auction, on Feb 5th, and try to win fabulous prizes, such as an animation tutorial by the studio PES Film.  Either way, Song of the Sea is a great experience for kids, opening them up to a rich foreign culture and providing and exciting adventure at the same time.

Editor’s note: As Mr. Elliot Cowan just pointed out, Song of the Sea is now opening at Village East Cinema 1/30/15.