Buy It, Use It, Break It, FlipBooKit!

Posted by Tristian on Dec 7, 2015 in Uncategorized | No Comments

Show goin’ up, on a Sat’day

Got your flip in a book and she toon’ay… 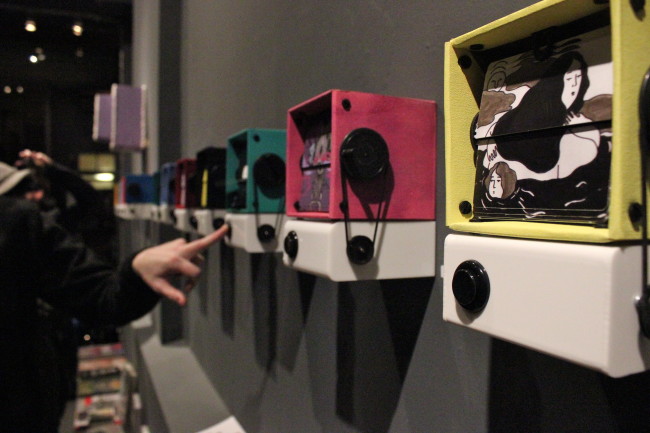 I traveled to Brooklyn on December 5th to see the opening of the FlipBooKit exhibit at GrumpyBert, a quaint shop/art-gallery in Boerum Hill. FlipBooKit is a customizable mechanical flip-book, essentially a modified mutoscope with a split-flip design. Each square-box kit has been lovingly/demonically crafted, not only featuring a unique 24-frame animation, but a painted/sculpted housing case. The kits on display had a simple button to play the motorized mechanism, but there are a variety of kits available for purchase that range from hand-cranked to automated-timers. 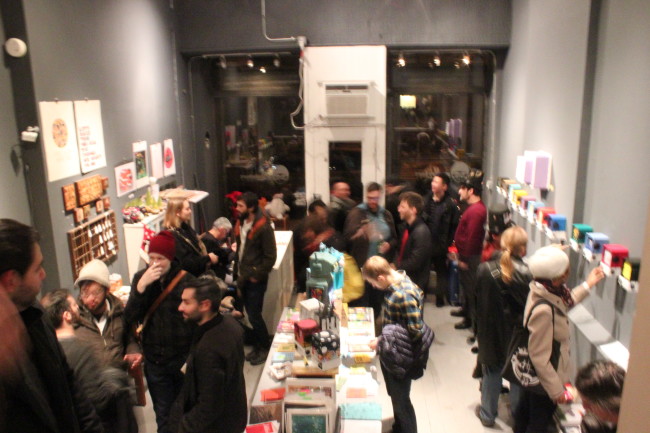 The FlipBooKit Show: Brooklyn at GrumpyBert

The majority of kits were the basic-cardboard-model ($29.95), then the original plastic model ($39.95) and a few displays of the SteamPunKit model ($199). These wonderful devices were designed by the kinetic artists Mark Rosen and Wendy Marvel. It is unclear whether or not their bowler hats with built-in kits were also for sale… One can only hope, or be inspired to install kits in other unexpected places!

Rosen and Marvel successfully created their small business with help from Kickstarter and Maker Faires. Marvel was inspired by an exhibit of Eadweard Muybridge at London’s Tate museum in 2010, and began working with Rosen to create a prototype out of re-purposed ink-jet printers.   Steven Goldstein, a veteran Disney Imagineer, was also brought on to the project. 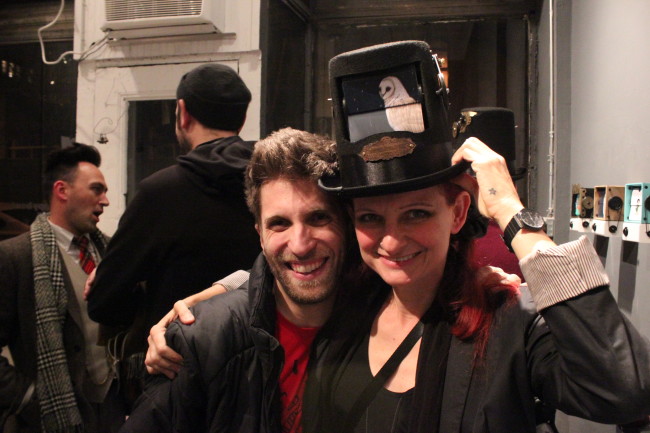 There are 40 artists participating at Grumpybert, in what is actually the 2nd FlipBooKit show in Brooklyn, with previous shows in Los Angeles, and an upcoming show in Chicago. This year has been described as an artist’s showcase, and I was interested to discover that only about 25% of the artists described themselves as actual animators.

30% were self-described illustrators, and the rest where a mix of painters, ‘artists,’ ‘designers,’ and one photographer, one cartoonist, and one motion-designer. I was happy to bring several friends to support one of our own ASIFA-East members Brett Thompson, who submitted a kit that was covered in his signature black and white FluidToons style. 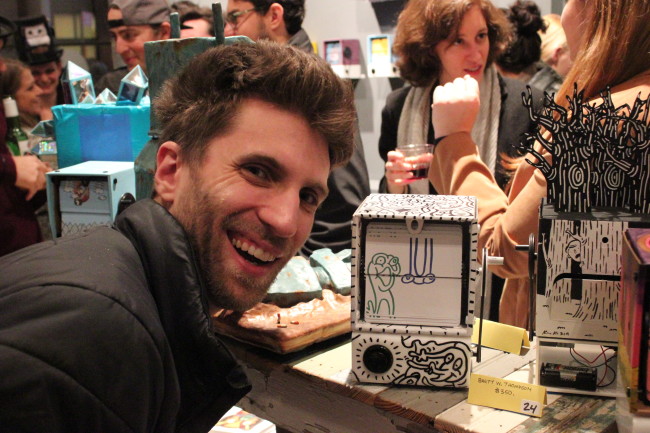 XrayDreams (the Marvel and Rosen team) submitted the more complicated Smart-DUINO kit, which enabled them to display a cascading animation over 3 kits mounted on the wall in a vertical row, which automatically triggers the flipping sequentially, so that a woman-figure appears to dive from the top box into the bottom box. 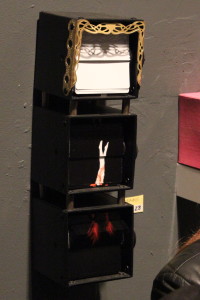 Alexander Lansang (freelance animator) created an impressive clay diorama for his kit, building a large teal robot around the animation, which I’ve discovered was born from the banner image of his website. He even included a little spotlight to illuminate the flip book. 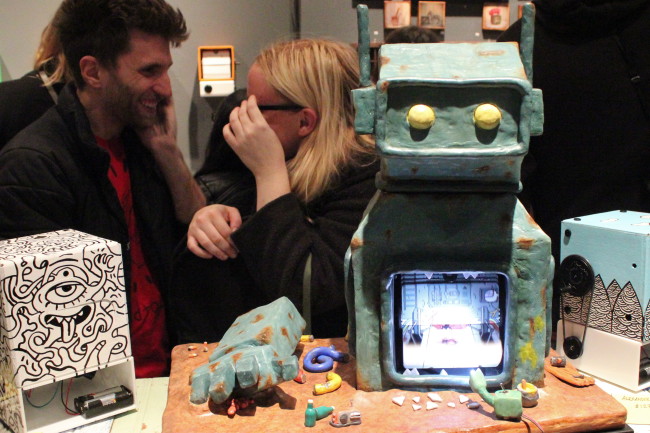 Nate Bear (illustrator) bulked up his kit with neon blue duct-tape and crystals that sprouted out of paper and foil. His “Crystal Bear” animation was his FlipBooKit personified, running with little stick legs and arms over cotton candy clouds and mountains, with eyes where the ‘screen’ would be. 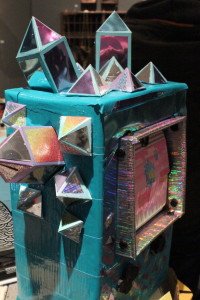 Rachel Koukal (digital & analog creator) fashioned her “Girl with the Most Cake” into a double layer cake sculpture, with the decidedly distressful message of “No Means No” in her animation.

Brandon Sines (painter) nested his kit in a cardboard Egyptian sphinx, and animated a dancing Big-foot creature, who shows up in many of his various works. I noticed the button was located in the sphinx’s paw, which suggests flexibility to the kits overall design.

Mitchel Kennedy (animator, currently at DreamworksTV) opted for a simple cardboard set painted blue, but his animation shows a delightfully fluid Mickey-Mouse-Type character bonking a pitiful Goomba-type with a hammer. While this action cycles, the loop itself wipes from B&W to full color in a sort of animated dust cloud. 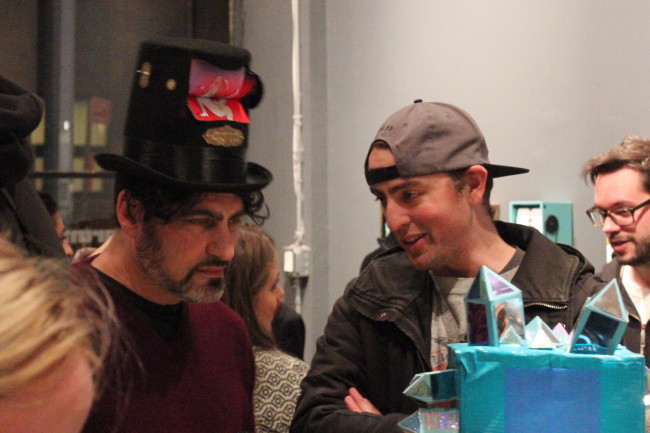 And finally Jeni Yang (multimedia artist) took her flip book of a… burger cat… and covered the kit in fur, bisecting a stuffed toy version of said cat (is this an internet meme I don’t know, like breading your cat? Please leave a comment if you know). 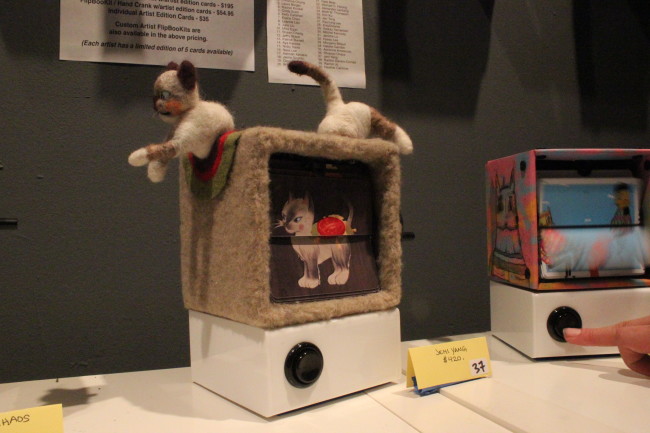 Overall the FlipBooKits were simply animated with vivid illustrations, with only a scarce few deciding to incorporate collage or photographic images. The company’s website includes a few limited released artist card packs for sale around $50, and I encourage you to explore the various party packs and customizable add-ons.  There will be a limited supply of the kits available in-store at GrumpyBert, but all can be ordered online, if you act quickly for the holidays.  Grumpybert is also filled with fantastic books such as “All My Friends Are Still Dead,” and other artwork like the mounted head of yarn-monsters.

If you get hungry during your trip to southern Brooklyn, stop by Grandma’s House for some delicious chips-encrusted chicken fingers with buttermilk sauce and ice tea.  The hosts are extremely friendly and their fantastic decor is All-American.  This restaurant was washed out of it’s original location in the seaport during Hurricane Sandy, but it looks 10 times greater now in Brooklyn (nicely inland). 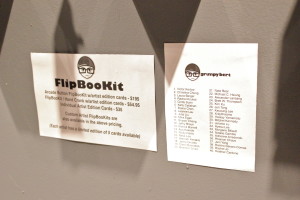 With art powered by two simple AA batteries, you can brighten up your home.  FlipBooKit is a unique new way to show your family and friends your skills as an animator, and artist.

The FlipBooKit Show: Brooklyn is on display till January 3rd.